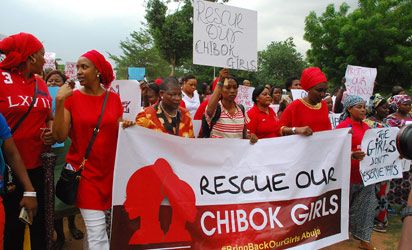 During the past week the barbaric acts of the Nigerian Islamist organisation Boko Haram have repulsed people around the world. Barak Obama along with other western government leaders have all denounced these ‘acts of pure evil’. However these gentlemen conveniently forget their own role in creating this monster. Here we republish an article which explains the origins of Boko Haram and how it is a product of Imperialism itself.

What are the origins of Boko Haram? Poverty and lack of education? Absolutely not. Because some parts of the South are not any better off and yet there is nothing like Boko Haram in those areas.

There are militants and ethnic militias everywhere in the country but nothing close to the dramatic violence and barbarism of Boko Haram; from suicide bombings, to assassinations of clergy, bombings of churches full of worshippers, motor parks, media houses and the burning of schools and other infrastructure.

Congregation and People of Tradition for Proselytism and Jihad better known by its Hausa name Boko Haram ("Western education is sinful") is a jihadist militant organisation based in the northeast of Nigeria north Cameroon and Niger. (Source: Wikipedia)

Is it Islam or the Quranic teachings? Absolutely not. Because similar and worse atrocities were committed elsewhere by people with no allegiance to Islam (think of the Holocaust or the Rwandan genocide).

Is it due to a special combination of Islam and poverty? This may be an attractive explanation but it adds nothing to our understanding because poverty has been in co-existence with Islam in the northern region for a long time and yet, the dreadful banditry of Boko Haram is a very recent phenomenon. And again why is there no Boko Haram in other poverty-stricken Muslim communities such as Saudi Arabia and Bahrain?

[This article was first published by Workers alternative]

Is it something set up by Al-Qaeda in Nigeria? This is clearly the kind of international conspiratorial nonsense that the Americans use to justify invasion of other nations and capture resources and markets.

So what really lies at the root of the emergence of Boko Haram? No amount of scholasticism or “common sense” can answer this question. Truth is always dialectical and concrete. Only by looking at the dialectics of this particular development can Boko Haram be fully understood.

The situation of backward semi (neo)-colonial countries in the era of imperialism is that their unity is external. What does this mean? It means not only that the unification of the various nationalities was carried out by foreign powers but that this unification is more about unifying the backward country to the world market while internal unity remains very primitive and will remain so in as far as development of industry and commerce remains primitive. This is the same thing as saying: while capitalism has not yet developed to the extent of breaking ethnic, religious and geographic barriers within the backward country, this same system has deeply integrated the whole country into global/world market. Internal unity remains primitive while external unity is advanced. This is an expression of what Marxists call the law of combined and uneven development.

This contradiction of internal disunity/external unity is characteristic of all backward semi/neo-colonial countries. The more backward a country or region is, the greater this contradiction; hence the role of Northern Nigeria as a place where all the contradictions appear in their most explosive form. This is because of the position of the region as the most backward on a capitalist basis among other regions.

In order to further integrate a backward country into world market, the imperialist world powers formed an alliance with feudal and other pre-capitalist classes and political structures. What does this mean? It means in order to build external unity, the imperialists encouraged and entrenched internal disunity.

The policy of Sabon Gari in the North readily comes to mind. Sabon Gari was an urban residential policy that was a product of the alliance between northern feudalists and imperialism. The latter built segregated settlements for the southern workers in the name of preserving the purity of Islam as demanded by the Emirs. This way imperialism encouraged feudal particularism at the same time when it (imperialism) was building a railway linking Kano to Lagos! The aim was to prevent the unity of the working class from North and South as would later manifest itself inevitably in the  setting up of the Railway Workers' Union.

Herein lies the essence of the contradiction: internal and external unity diverge logically; to integrate Nigeria into the world market, the internal unity of the country had to be undermined. In a vulgar sense, this is the well known divide-and-rule tactic used by the colonialist. The ultimate political objective of this tactic is to prevent a proletarian uprising against the rule of capital by dividing the ranks of the workers and petty bourgeois masses.

How does this link to our original discussion on Boko Haram?

Just in the same way that imperialism formed an alliance with feudalism and other pre-capitalist social and political forms, the local bourgeoisie emerged with their umbilical cord inseparably linked to pre-capitalist systems on the one hand and to the imperialist masters on the other hand. Consequently, the local bourgeois is fully tied to feudal particularism and primordial political forms founded on ethnicity and religion.

In the existence of this local bourgeoisie we find a further manifestation of the law of combined and uneven development. This new bourgeoisie on the one hand accepted the imperialist project of “one Nigeria” and embraced bourgeois democratic parliamentarism, but on the other hand, these same bourgeois employed pre-capitalist, feudal, ethnic and religious politics. This is, in dialectical terms, the identity of opposites, of external unity and internal disunity, of capitalist and pre-capitalist forms.

This phenomenon characterizes all sections of the Nigerian bourgeoisie, North, West and East. The Shari'a movement of 2001 in the North represented a qualitative development of this historical process. Sections of the Northern bourgeoisie and clergy motivated by nothing other than access to power and public resources tapped into the religious sentiments of the toiling masses. Consequently, all of a sudden the most reactionary of clergy found themselves having access to public resources and hence arms. For the first time, the empty "Western education is sin" ideology became a material force; the pity-arousing "Almajiris" had qualitatively transformed into the dreadful "unknown gunmen". Instead of begging they extort; instead of praying to God on our behalf they want to become our gods. Capitalism had thus unleashed its latest monster. It has nothing to do with Islamic faith or so much about poverty as such, although it plays its role. It is the outcome of capitalist contradictions in a backward, poor and semi-feudal society like ours.

Marxists reject both options provided by the bourgeoisie, rewarding murderers (via amnesty) and the massacre of civilian populations (via a state of emergency). The Labour leadership in the NLC (Nigerian Labour Congress) must advance the programme of armed self-defence by the communities and workers in collaboration with the revolutionary elements of the rank and file among the security forces.

Do we think the current labour leadership can easily and cheaply carry out this task? Absolutely not. But by advancing this programme and placing the responsibility on the shoulders of the current reformist labour leadership, we accelerate the exposure of the latter's bankruptcy. We aim at replacing the present bankrupt, opportunistic and reformist leadership of the labour organizations and party with a revolutionary leadership that can carry out this programme.

*For mass mobilization of workers into the Labour Party!
*Down with opportunistic labour leaders!
*For the socialist reconstruction of Nigeria!