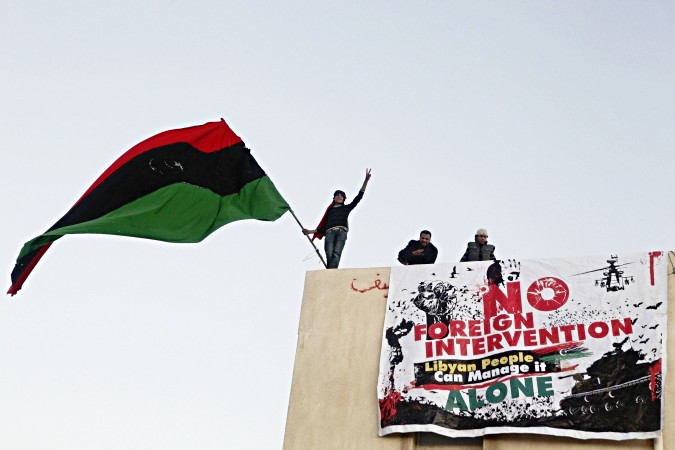 Rebels in the Libyan city of Az Zawiyah (close to the capital) have fought back an attempt by Gaddafi’s forces to retake the city. According to eyewitness reports there were six hours of fighting during the night as the two sides struggled for control of the city. As one anti-Gaddafi activist explained, “We managed to defeat them because our spirits are high and their spirits are zero.”

Both camps are heavily armed, as much of the military has sided with the masses that have risen up, while Gaddafi still has some crack forces loyal to him. The rebel forces have tanks, machine guns and anti-aircraft guns. In fact rebels in the city of Misurata downed one of Gaddafi’s military aircraft on Monday.

There is now the real possibility of a major military confrontation between the two sides, as Gaddafi and his sons dig in to resist with all their forces, as they desperately try to hold on to the areas still under their control. This rotten regime, which has lost control of most of the country, has no qualms about killing its own people. Their motto seems to be “if we have to go we will drag the country down with us.”

Faced with this scenario all the major world powers are coming together to put pressure on Gaddafi to go. The crisis in Libya has already pushed up the price of oil to $114 and if the situation continues to worsen it could go up a lot more. Growth in the three main areas of the advanced capitalist world, North America, the European Union and Japan was already somewhat sluggish before the events in the Middle East erupted. A significant hike in the price of oil could push the world economy back into recession just as it has emerged from the previous. This is sending alarm bells through all the corridors of power.

That explains why they are all now expressing concern about the “humanitarian” disaster that Libya could be facing. Thus the UN Security Council over the weekend voted unanimously to impose sanctions on Gaddafi's regime. These include an arms embargo and freezing Gaddafi’s assets. They have also referred Gaddafi to the International Criminal Court for crimes against humanity.

Powers such as the United States and Britain are looking into the possibility of imposing a no-fly zone over Libya, like the one they placed over Iraq during the regime of Saddam Hussein. The US is moving warships and air forces closer to Libya, while Britain is considering moving Typhoon jets to the Akrotiri RAF base in Cyprus.

British Prime Minisetr David Cameron announced yesterday that he had asked his Chief of the Defence Staff, to discuss with allies the setting up of such a no-fly zone. And today he is quoted as saying that, “…we do not in any way rule out the use of military assets.” Last week Ian Birrell in The Guardian called for NATO and the United Nations to act, calling for a military intervention, for “humanitarian” reasons of course.

Gaddafi feels “betrayed” by the West

The hypocrisy of the imperialists has no limits. In the past they made deals with Gaddafi, both economic and military. That also explains why Gaddafi in a BBC interview revealed that he feels “betrayed”. The BBC reporter Jeremy Bowen put this to Gaddafi:"In recent years you've had a rapprochement with Western countries. You've had important leaders like Tony Blair here. But now there are Western leaders saying you should go. Do you feel a sense of betrayal about that? Did you ever regard them as friends?" And Gaddafi’s reply was: “Of course it's betrayal. They have no morals.” Indeed, there is no honour among thieves, as the saying goes.

Tucked away on page 524 of the Congressional Budget Justification, Foreign Operations FY 2009 Budget Request we find that the US government, far from pushing for Gaddafi’s overthrow, had been financing Libya in their so-called effort to “combat al-Qaeda”.

The document clearly explains US objectives in Libya:

And as if to cover themselves against any possible accusation that they were in fact training Libyan security forces, that have never been renowned for their respect for human rights, the document adds:

“This would include training programs that bring Libyan officers to the United States and expose them to democratic practices and respect for human rights.” 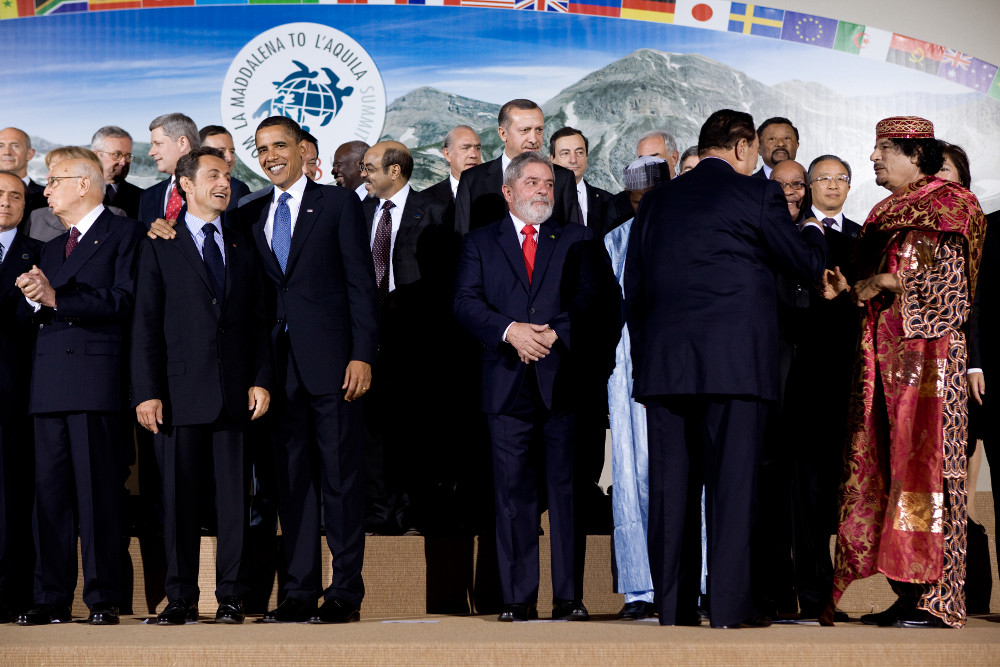 "The Good old days". Group photo of G8 Summit in Italy, with Mubarak and Gaddafi. Photo: White House/ Pete Souza In 2008, the US allocated $333,000 in IMET funds and had budgeted a further $350,000 for 2009 for Libya because of its “commitment to renouncing weapons of mass destruction; combating the rapidly growing terrorist threat posed by al-Qaeda in Libya and the region; and promoting professional, effective law enforcement and military services that respect international norms and practices.” (Source: http://www.state.gov/t/pm/ppa/sat/c14562.htm). Both Egypt and Tunisia received far greater amounts and over a much longer period, without any noticeable improvement in “democratic practices and respect for human rights.” [Note: The IMET, International Military Education and Training, programme provides funding to train military and civilian leaders of foreign countries, primarily at schools and facilities in the US].

The Europeans and the Russians were no better. According to one European Union report, in 2009 alone EU member states provided Gaddafi with €344 million of military equipment. Russian leaders have been making statements in the past few days about Gaddafi being unfit to lead his country, but it was only just over one year ago, in January 2010 that they signed a contract for the supply of military equipment to Libya worth 1.3 billion euros. That was in the good old days when they could do business with the very same man they now say must go.

What the imperialists are now considering – if they can get away with it – is to exploit the crisis in Libya to get a foothold in North Africa, which is being shaken by revolution, from Egypt to Morocco and beyond across the whole of the Middle East. Their main concern, however, is not the well-being of the Libyan people, but to guarantee the flow of oil out of Libya’s oilfields and to defend the interests of their companies that operate in the country.

Lord Trefgarne, chairman of the Libyan British Business Council, was reported as saying in The Independent that: "We have about £1.5bn of trade in total, of which the largest part is imports of Libyan crude oil and gas into the United Kingdom, but we had visible exports of approaching £400m last year that I guess must be at stake."

Most of the major oil companies operate in Libya and oil production is now reported to be down by 25% and could go down further. As we have seen, the price of oil is soaring as a consequence.

The falsity of their sudden concern for the plight of the Libyan people can be seen by comparing their reaction to the war in the Congo, where it is estimated about five million people have been killed in recent years. There was no “humanitarian” intervention there; the reason being that the war was proving quite lucrative to western companies who were using the minerals mined in the Congo in almost slave-like conditions. The various militias were actually backed by one or other of the major imperialist powers.

Now we are to believe that they have suddenly discovered concern for the suffering of the Libyan people. We must state it clearly: the reason why NATO and the UN would back any military intervention in Libya would be to strangle the genuine revolt of the people and get control of the oil at the same time.

Gaddafi by holding on at all costs has led to a revolutionary situation emerging in Libya, where whole sections of the army and security forces have gone over to the side of the people. Power has de facto fallen into the hands of the rebels in most of the country, and this is what is terrifying the major powers.

But the Libyan people want to liberate themselves

All genuine socialists would oppose an imperialist invasion of the country. But it is also the revolutionary people of Libya who are opposed to such an invasion. According to Al Jazeera, Abdel Fattah Younes, Libya's former interior minister who defected to the opposition, has stated that the idea that the people would welcome foreign troops was "out of the question."

This has been confirmed by Hafiz Ghoga, spokesperson of the newly formed “National Libyan Council” that has been set up in Benghazi. Ghoga is quoted as saying: "We are completely against foreign intervention. The rest of Libya will be liberated by the people ... and Gaddafi's security forces will be eliminated by the people of Libya."

Journalists who have crossed into the liberated areas of Libya have reported that the people in Benghazi have been raising banners with slogans such as “No to foreign intervention” and are saying they do not want US arms. They understand perfectly well that any invasion on the part of NATO forces, even if backed by the official seal of the United Nations, would not be to help the Libyan people.

They understand that so long as Gaddafi was entrenched in power, with his despotic regime that regularly used torture and murder to deal with any dissent, the “democratic” powers had no qualms in doing business with him. They have made economic and financial deals with him, while the people suffered. They have been prepared to sell him arms and even to train his forces, the same forces that have now been unleashed on the Libyan people.

The task of overthrowing Gaddafi belongs to the Libyan people, the workers and youth, the unemployed, the downtrodden poor. If any outside power were to step in and attempt to remove him, it would be to steal victory from the Libyan people. The Libyan people know that and will resist any such moves.