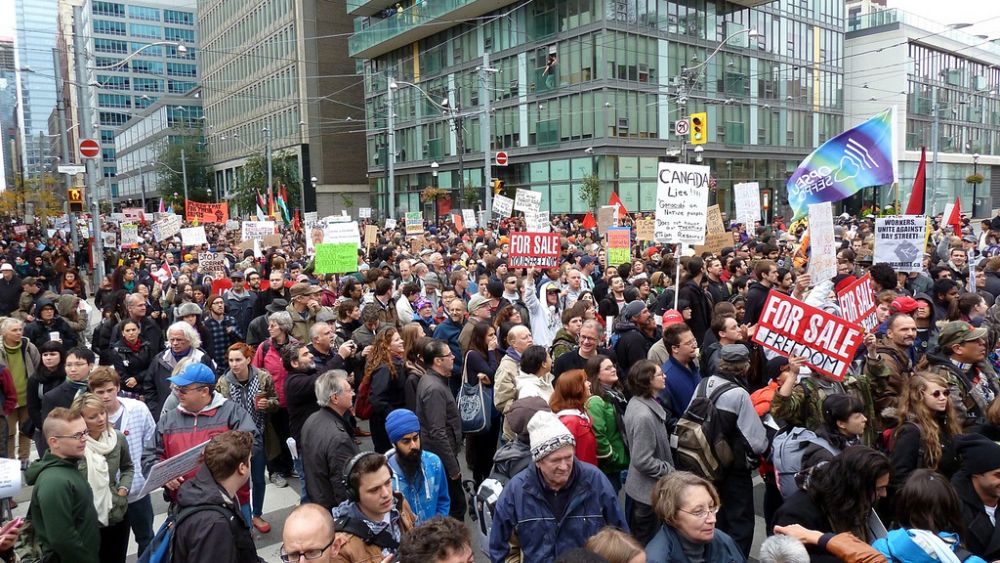 The Canadian corporate media commentators were all united with a single opinion — the #Occupy movement would have no traction north of the border due to Canada’s “stable banks that never needed a bailout”. Despite the fact that this is a lie, (the federal government gifted $25-billion to the Canadian banks via the Canada Mortgage and Housing Corporation), on Saturday 15th October the people showed the press just how out of touch they are. Over 1,000 in Montreal, over 2,000 in Vancouver, over 5,000 in Toronto, and hundreds more in a dozen other cities, marched to join the international occupy movement.

After being ignored and belittled, the movement that began in New York has taken firm root in Canada. The very notion of criticizing corporate rule and capitalism has been ridiculed in the mainstream media, so much so that large numbers were silenced. Now these people have said they will not be shut up and have burst onto the political scene.

In response to those like Prime Minister Stephen Harper, who say that Canada does not have the same inequality as the United States, we answer that Canada’s inequality is increasing at a far higher rate than in the US. Over the last 30 years, the income share of the richest 1% of Canadians has doubled. There exists an oligarchy of approximately 500,000 that owns 67% of all Canadian wealth. On the other side, almost a million are forced to use food banks, a third of whom are children. There is much for workers and youth to get angry about. 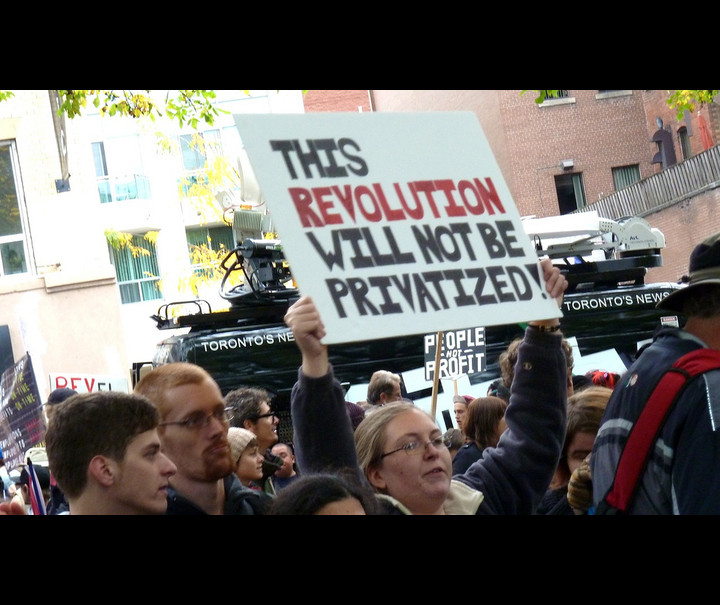 It is not accidental that the largest occupy demonstration started on Toronto’s Bay Street — the home of the Toronto Stock Exchange and the Big 5 banks (the “scene of the crime”). Over 5,000 blocked the intersection of Bay and King on a wet and windy day and then marched to St James Park a few blocks away. The Marxists organized in Fightback were there in force and received an amazingly favourable reception. Our main slogan, “NATIONALIZE THE BANKS — NATIONALIZE THE TOP 150 CORPORATIONS” got an enthusiastic echo with many saying that is what we need. 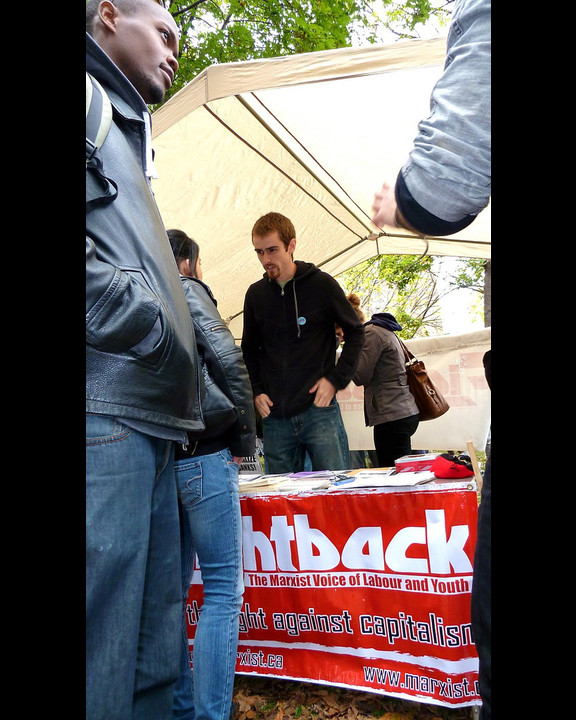 At the park, many groups set up and the Fightback Marxist tent was a hive of activity. There was a constant stream of four or five people at any one time coming up and asking for our perspective on events. Half way through the day, we ran out of the latest issue of Fightback and by the end of the day, we had sold all our material! Over 100 people signed up to learn more about Marxism. The movement is very diverse and people have many, many, questions; the clear ideas of Marxism showed their power in this situation. The interest was so great that several of our organizers literally lost their voices after a full day of discussing with new people.

At this stage of the movement there are a thousand questions but very few answers. One of our key messages was, “The capitalist system is not broken — it is meant to work this way.” Therefore, if we are to end the crisis and end inequality in society, we need to do away with capitalist production for profit and replace it with a socialist society that produces for need. This message gained serious traction and Fightback supporters managed to present their views to the mass media on a number of occasions. You can see a selection of our interviews below: 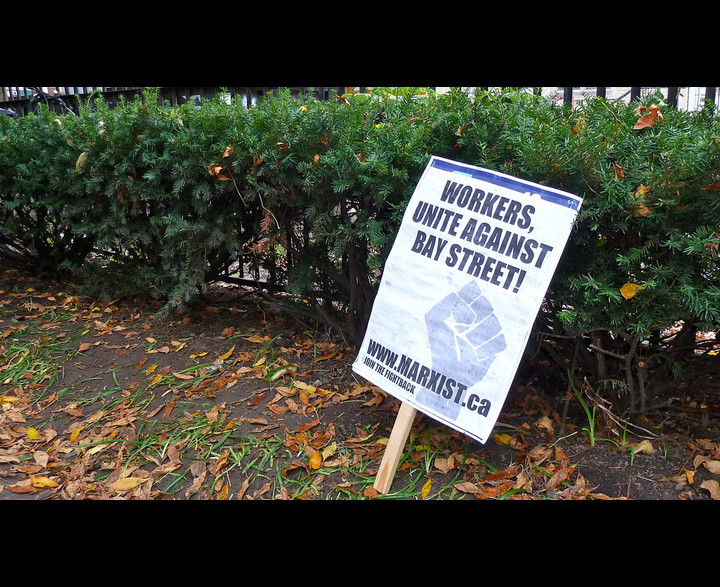 The question arises, where next for the occupy movement? Approximately 200 are camping out at St James Park on a regular basis with thousands others coming in-and-out. If this movement is to gain traction, it much reach outside a single park and engage with the wider working class. Encouragingly, the movement was supported by many unions; the Canadian Auto Workers and the Communications, Energy, and Paperworkers Union gave formal endorsements, while Sid Ryan of the Ontario Federal of Labour was present and supportive. Postal workers and CUPE flight attendants, who have just had their right to strike removed by the Harper Conservatives, were also there and received warm support. The unions did not mobilize their members in a major way on the 15th but instead gave significant logistical support in the form of port-a-potties, marquee tents, generators, etc. There are plans for a union-supported march, which would be a big boost to the movement. 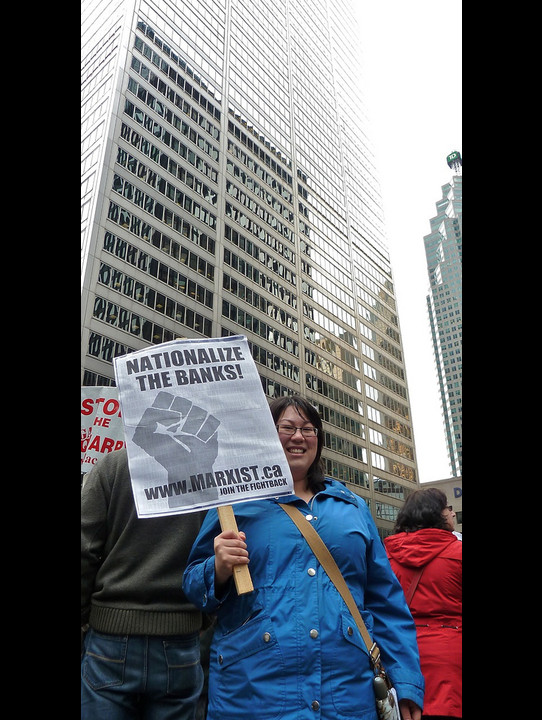 Much time is spent on “consensus” models and discussing the correct way to discuss. In our view this is not the best method but is symptomatic of the early stages of a movement that brings out a very broad range of ideas. Hopefully the assembly will soon adopt some real concrete demands that are understandable to workers and youth. Free education, free public transportation, defence of the right to strike, decent pensions, universal childcare, a massive housing program — these are demands that would really resonate.

And how would we pay for this? The money is there — the top 1% have it. Expropriate the 1%; nationalize the banks and top 150 corporations and put them under democratic workers’ control!  To achieve this we need a revolutionary organization that can unite all sectors of the oppressed and educate them on how to defeat capitalism. Fightback in Canada is attempting to build this organization in solidarity with the International Marxist Tendency internationally. Join our fight!

On Saturday October 15th an Occupy Montreal rally was held at Square-Victoria in front on the Montreal Stock Exchange and the Chamber of Commerce. The numbers fluctuated during the day, reaching maybe a couple thousand at its height, but given the recycling of the demonstration with people coming and going over the course of the day, the total number of participants was surely in the thousands. Comrades from the International Marxist Tendency were present, selling the journal La Riposte (www.marxiste.qc.ca) as well as Fightback magazine. There were tents set up early in the day and food available to the occupiers. It was a diverse youthful crowd with students from many different campuses, and many different political organizations and unions present, including workers from Munaca (support staff at McGill University currently on strike). Amir Khadir from Québec solidaire was also present. The mood was festive and the interest in Marxist ideas was high. Sales of La Riposte and Fightback magazine came very easily and many people gave us their email addresses and said they wanted to be involved.

We plan on continuing to be involved in the movement, supporting it and helping it to spread in any way we can.

You can read our statement in french in support of the movement here: http://www.marxiste.qc.ca/nouvelles/1-dernieres/268-la-riposte-appuie-occupons-montreal

Occupy Wall Street has spread all over the world. In Ottawa, when a group of activists got wind of an international day of action for 15th October, a meeting was quickly called through Facebook. tWithin a very short time, almost 120 people crammed themselves in a meeting room at the University of Ottawa’s student centre. A decision was made that Confederation Park in downtown Ottawa would be occupied on the 15th and a General Assembly would be held. Working committees were formed to organize the occupation. The enthusiasm was high.

When October 15 came, more than 700 people showed up to protest the 1% of the population, the profiteering capitalists, who are wrecking society. What is important is that there were many new faces in the crowd, showing that this Occupy movement has touched ordinary workers who have to bear the brunt of capitalist crisis. People are angry. People are fed up. The General Assembly was called to order and hundreds of people were politically engaged for the first time. While there are some confusions — from the GA process to the demands of the movement, the mood was clear: people are fed up with the top 1%, the Canadian oligarchy, who are running this country to the ground. As this movement moves forward, the people will learn that they have to organize and can only trust themselves. The GA decided to occupy the park for an indefinite period, and by the end of the day, more than 100 people are staying overnight at the park, risking arrests by the police.

Two comrades of Fightback Canada in Ottawa were amongst the participants. We managed to sell eight Fightback papers in the short time we were there and talked to the people of the need to nationalize the banks and the top 150 Canadian corporations under the democratic control of the workers. We intend to keep going there to advocate for working class demands and for socialism.