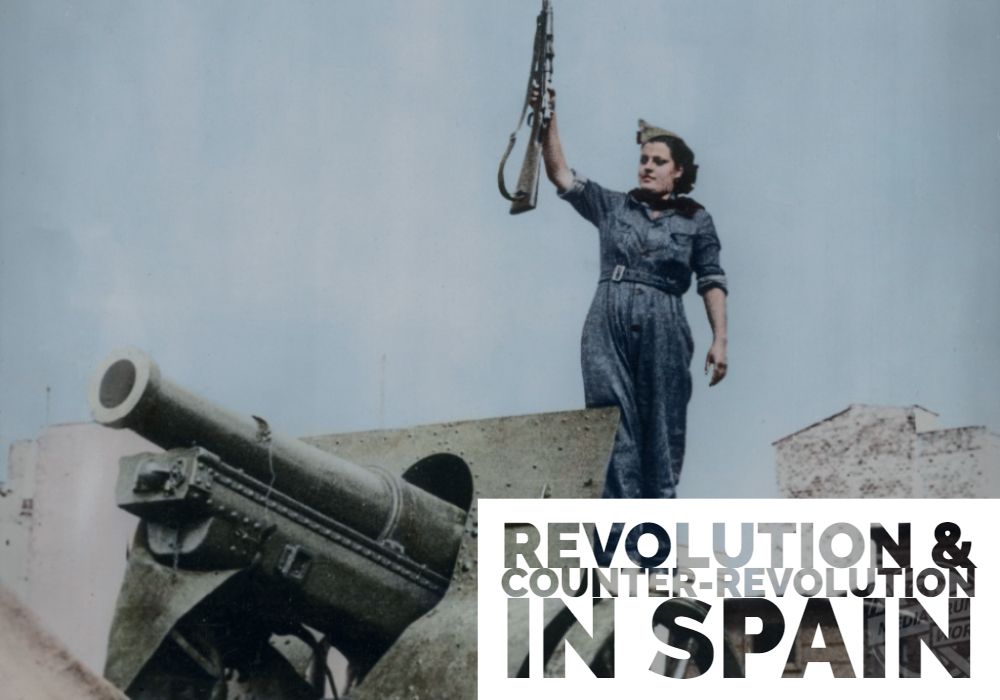 The jailing of workers and peasants and the opening of the front lines by ‘republican’ officers to the fascists: that is the story of Loyalist Spain from November 1937 to May 1938. There is time and space to add only a few words as this book goes belatedly to press.

General Sebastian Pozas adequately symbolizes the period: An officer under the monarchy; an officer under the republican-socialist coalition of 1931–1933; an officer under the Lerroux-Gil Robles bienio negro of 1933–1935. Minister of War before the fascist revolt broke out. He moved heaven and earth to get away from Madrid in the dark days of the siege in November 1936. When Catalan autonomy was done away with and the CNT troops were at last subordinated entirely to the bourgeois regime, Pozas was appointed chief of all the armed forces of Catalonia and the Aragon front. He effectively purged the armies of CNT and POUM ‘uncontrollables’, arranging for whole divisions to be wiped out when they were sent under fire without artillery or aerial protection. ‘Comrade’ Pozas, who graced the plenum of the Central Committee of the PSUC, way ‘obviously’ the man to hold the Aragon front against Franco ... Now he is in a Barcelona prison, charged – and the military story is only too clear – with betraying the Aragon front to Franco.

The consequences of the alliance with the ‘republican’ bourgeoisie, of the People’s Front programme, are now apparent. The fascists have reached the Mediterranean. They have split the remaining anti-fascist forces in twain. For the time being the race between Franco and the regroupment of the proletariat has been won by Franco. The Stalinists, the Prieto and Caballero socialists, the anarchist leaders, have proven insurmountable obstacles on the road to regroupment, immeasurably facilitating Franco’s victory.

These criminals will soon fall out among themselves. They will attempt to shift the blame on each other. In that attempt, much more will be revealed concerning the machinations whereby they bound the workers and peasants hand and foot, and made impossible a successful war against Franco. But already we know enough to say that no alibis will enable them to clear themselves. All – Stalinists, socialists and anarchists – are equally guilty of having betrayed their followers. All have betrayed the interests of the workers and peasants – the interests of humanity – to the bestial régime of fascism.

Many will escape from Franco, as did the Stalinist and social-democratic functionaries from Hitler. But the millions of workers and peasants cannot escape. For them, today, tomorrow, the next day, as long as life continues, the task of smashing fascism remains to be carried out. Fight or be crushed – they have no other alternative.

The Spanish proletariat – crushed, as Berneri said, between the Stalino-Prussians and the Franco-Versaillaise – may yet touch off a flame that will again light up the world. Passing beyond the Pyrenees, where the period of the People’s Front, as in Spain, is closing, that flame can unite with the hopes of the French proletariat, now faced with a choice between naked bourgeois dictatorship and the road of revolution.

But if the revolutionary conflagration does not break out, or is smothered, what then?

The tragic lessons of Spain are, in any case, of profound concern to the American working class and have an immediate bearing upon ‘purely American’ problems.

Here the issue will soon enough be posed as inexorably as in Spain or France. The simple truth is that American capitalism has arrived at such an impasse that it can no longer feed its slaves. An army of the unemployed as large as that of 1932 now receives at Roosevelt’s hand a fraction of the inadequate hand-out offered in 1933. The production index drops at four and five and six times the rate of the 1929–1932 decline. The government prepares cold-bloodedly for imperialist war as a ‘way-out’. Crisis, unemployment, war – these have become the ‘normal’ characteristics of the declining capitalist order. Since 1929 America has been ‘Europeanized’. We face here the problems which have been faced since the war by the European proletariat.

Pessimism, defeatism, these are the reactions of the few, who thereby deduce from the reformist betrayals in Europe a justification for abandoning the American masses to a like doom. But to the workers and the oppressed toiling masses of city and country, pessimism and defeatism are alien. They must fight or be smashed – they have no other alternative. The vast, inexhaustible vitality of the American working class is the richest capital of the international labour movement. It has yet to be used, yet to be thrown into the breach. In the last four years, the American proletariat has given such evidence of its resources and its power as many of us did not dream of in 1933. It has organized itself within the very citadel of American capitalism – steel, rubber, autos. It can overthrow that citadel – if it has the will to do so and a leadership capable of assimilating the lessons of these catastrophes.

The task of the book is to provide the class-conscious worker and his allies in America with materials for understanding why the Spanish proletariat has been defeated, and by whom betrayed.

The heroism of the Spanish workers and peasants must not be in vain. From their failing hands the banner of struggle to the death against capitalism can be taken up by the American workers. Let them grasp it with the aid of a vanguard which has assimilated all the terrible lessons of Russia, Spain and France, with a strength and assurance such as the world has not yet seen, and carry it through to victory, not only for themselves, but for the whole world of toiling humanity!