As of October, this year, the Marxist Organisation “Crveni” (“Reds”) will be producing a monthly publication in Serbo-Croatian, called “Crvena kritika” (“Red Critique”) and distributing it throughout Yugoslav lands. 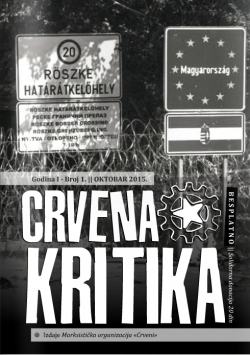 PDFThis will primarily be in Serbia and Bosnia and Herzegovina, where we have branches in 4 cities – Belgrade, Novi Sad, Sombor (Serbia) and Banja Luka (Bosnia and Herzegovina) as well as in other cities where we have members, contacts and sympathizers. The publication will initially be free of charge, but readers are encouraged to donate and help fund our efforts.  Each issue will have the main theme. The theme of issue no. 1 was the refugee question, featuring an article on our work in the Horgos border crossing. The theme of the next issue will be the question of revolution in our time.

This publication represents yet another steady step in building the forces of Marxism in Yugoslavia. It will make it easier and more efficient for us to formulate and spread our ideas and to educate, agitate and organise among various left leaning individuals, groups and social movements. We have already seen the first sign of this, as “Crvena kritika” has already attracted the attention of a series of people who pre-ordered a copy of the first issue.