Details
our correspondent in Mexico City
31 May 2007

Mexico
Share
Tweet
On Tuesday, May 29, over 150 people, mainly workers and trade unionists filled a hall in the Workers' University of Mexico to hear Alan Woods speaking on Venezuela and the Latin American revolution. The ideas he outlined connected immediately with the mood of Mexican workers and youth after the tumultuous events of last year when millions mobilise against electoral fraud. 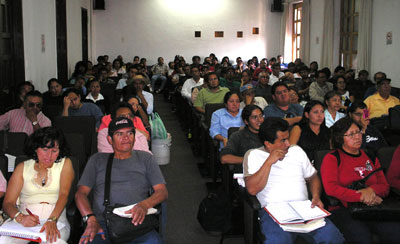 The Workers' University of Mexico was set up in the 1936 by President Lazaro Cardenas, on the advice of Lombardo Toledano, the Stalinist boss of the powerful CMT trade union federation. Toledano was one of the chief "gangsters of Stalin" who organized the first attempt on the life of Leon Trotsky in 1940. A large stone bust of Toledano still stands in the colonnaded courtyard, perpetuating his sinister presence.

It is therefore a supreme irony that the well known Trotskyist theoretician and leader of the International Marxist Tendency was able to address a packed meeting in the university on the subject of Venezuela and the Latin American revolution. Alan had been invited by the Workers' Co-ordinating Committee in defence of the ISSSTE, an important part of the struggle against the Calderon government to cut the budget and attack pensions and welfare spending. 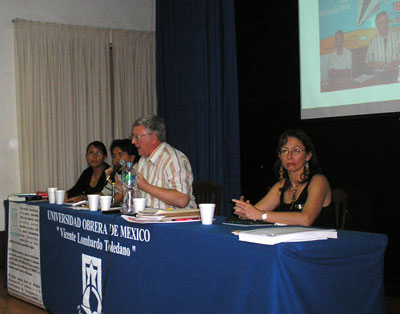 At five o'clock on Thursday 29 May, over 150 people, mainly workers and trade unionists, but with a good sprinkling of youth, filled the hall. Many had to stand and others listened at the doors. The mood was one of great expectation and intense interest.

Alan spoke for one hour, during which he outlined the international situation, emphasizing the crisis of capitalism on a world scale. Quoting the US economist Stephen Roach of Morgan Stanley, who is predicting a recession in the USA, Alan said: "We say, if the USA sneezes, Europe catches a cold; and we should add, and Mexico will catch pneumonia." The slowdown in the US economy was already affecting the remittances of Mexican immigrant workers, upon which whole regions of the country depend, he pointed out.

Alan went on to describe the revolutionary wave that is sweeping Latin America. "When I was last here three years ago it seemed that Mexico was stable. Where is the stability of Mexico now?" There is not a single stable capitalist regime from Tierra del Fuego to the Rio Grande, he affirmed.

He then dealt with the revolution in Venezuela in some detail, emphasizing that the main motor force was the masses themselves. Referring to the heroic uprising of the masses in April 2002, which overthrew the coup and saved the Revolution, he said: "I can only think of one historical parallel, and that is the magnificent uprising of the workers of Barcelona in the summer of 1936, when the workers smashed the fascists and saved the Revolution from instant defeat." 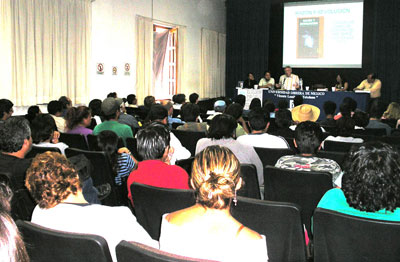 Alan spoke energetically in favour of the programme of nationalizations recently announced by Chavez and the refusal to grant a licence to RCTV, which he described as a "golpista" (pro-coup) television and a nest of counterrevolutionaries. He poured scorn on the so-called campaign for "press freedom": "Where is the press freedom in Mexico or anywhere else, when the press and TV are in the hands of multi-millionaires who uphold the interests of Capital?" he asked.

However, while defending the Venezuelan Revolution against internal counterrevolution and imperialist interference, he also stressed that the revolution was not yet complete: "It is only half a revolution, and you cannot make half a revolution. In the end one class must win and the other class must lose. And it will not be settled by parliament, laws or constitutions. In the end, it will be settled on the streets, in the factories, in the villages and in the barracks," he said.

There followed a lively period of questions and discussions. Questions were asked about the need for a revolutionary party, the relevance of Marxism, and the PRD. A handful of sectarians made a fool of themselves by accusing Alan of being a reformist and "Social Democrat", which aroused some merriment in the audience.

In his reply Alan said: "We have had an excellent discussion, with a free and democratic exchange of views. Everybody spoke their mind freely, including the men from Mars [laughter]." He then explained the need for revolutionaries to link to the real movement of the masses.

Answering the sects who dismiss the PRD as a "bourgeois party", Alan said: "On 31 July last year, three million people came out onto the streets to protest against electoral fraud. Were they three million bourgeois? They were workers and peasants! Our place is always with the masses! In Mexico there is a powerful movement against the Calderon government. The masses will turn to the PRD because there is no alternative. It is as simple as that; maybe not for the inhabitants of Mars, but certainly for the people of Mexico." [laughter and applause]

Finally Alan made an impassioned appeal to step up the fight for socialism and for the strengthening of the Marxist tendency. He pointed out that the fight for a PRD government was not enough. It was necessary to build a powerful Marxist current with roots in the trade unions and the PRD, fighting for a genuine socialist programme.

The reply was greeted with enthusiastic applause, and afterwards, many workers bought Marxist books and congratulated Alan Woods, expressing complete agreement with the views he had expressed.