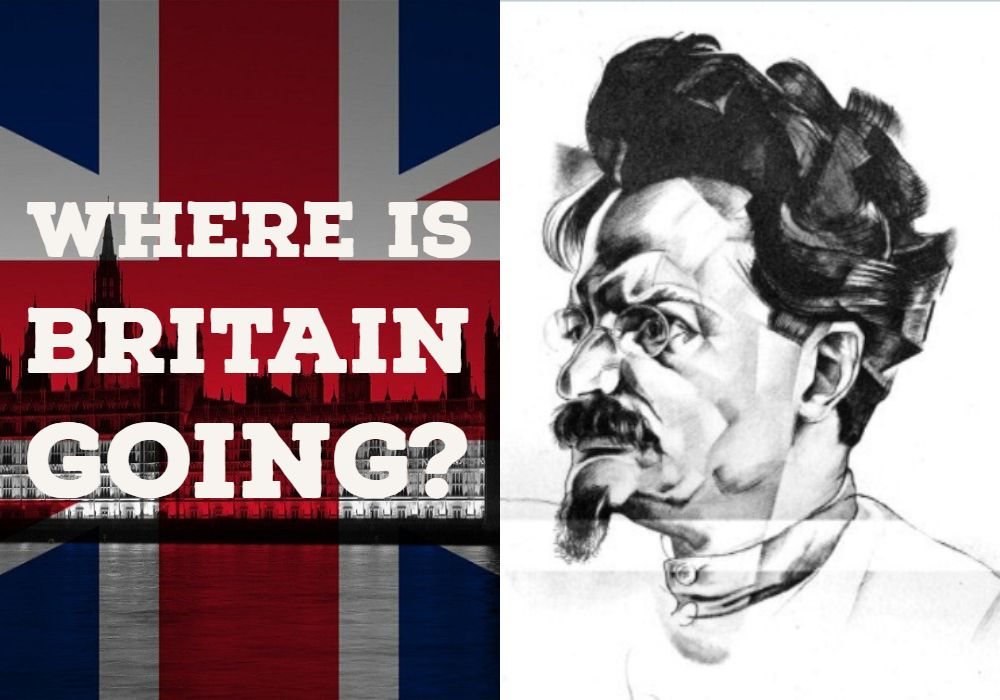 Preface to the American edition

The present work is devoted to the future destiny of Britain. But it may also interest the American reader – firstly, because Britain occupies all too great a place in the world., and secondly, because the United States and Great Britain are twin stars, and the faster the one dies out, the more brightly the other flares up.

The conclusion which I reach in my study is that Britain is approaching, at full speed, an era of great revolutionary upheavals. Of course, British secret policemen and their American disciples will say that I am engaging in propaganda for a proletarian revolution – as if one could alter the direction of development of a great nation from outside, by means of a pamphlet! In fact, however, I am merely attempting, by analysing the leading factors in Britain’s historical development, to elucidate the historical path down which she has been thrust by external and internal conditions. In this respect, to make accusations of revolutionary interference in other people’s business is like accusing an astronomer of causing the solar eclipse that he had forecast.

Naturally I do not mean by this that astronomical events can be identified with social phenomena. The former occur outside of us and the latter through us. But this does not mean that historical events take place solely at our volition and can be steered by means of pamphlets. Books and newspapers which have as their task the defence and protection of capitalism, British capitalism included, have been and are being published on a far greater scale than ones directed against it. The matter is not, however, decided this way. This or that idea can exert an effect only in so far as it is rooted in the material conditions of social development. Britain is moving towards revolution because the epoch of capitalist decline has set in. And if culprits are to be sought, then in answer to the question who and what are propelling Britain along the road to revolution we must say: not Moscow but New York.

Such a reply might seem paradoxical. Nevertheless it corresponds wholly to reality. The powerful and ever-growing world pressure of the United States makes the predicament of British industry, British trade, British finance and British diplomacy increasingly insoluble and desperate.

The United States cannot help striving towards expansion on the world market, otherwise excess will threaten its own industry with a ’stroke”. The United States can only expand at the expense of Britain. Speeches on the revolutionary import of this or that “Moscow” pamphlet can only produce an ironic smile when the economic life of a great nation is being choked in the steel vice of American dominance by Mr. Dawes’s [1] patented system. Under the cloak of today’s “pacification” and “recovery” of Europe, huge revolutionary and military upheavals and conflicts are being prepared for the future. Mr. Julius Barnes [2], who stands close to the Washington Department of Commerce, proposes that the European debtor countries be allocated those sectors of the world market where poor and debt-ridden European cousins will not hinder the expansion of their transatlantic creditor. By helping to restore the European monetary system the United States is merely bursting one inflationary illusion after another, and helping Europe to translate its poverty and dependence into the language of hard currency By either pressurising or giving deferments to creditors, by granting or refusing credit to European countries, the United States is creating for them an increasingly constricted, economically dependent, but ultimately untenable position; which also provides the conditions for revolutionary social upheavals. The Communist International [3] today is ... almost a conservative institution by comparison with the New York Stock Exchange. Mr. Morgan [4], Mr. Dawes and Mr. Julius Barnes are the busy artificers of the approaching European revolutions.

To a considerable degree the United States is carrying out its work, in Europe and throughout the world, with Britain’s collaboration and through her agency. But for Britain this “collaboration” is only the form of a growing dependence. Britain is, as it were, ushering the United States in only for her to take possession. While surrendering their world domination British diplomats and businessmen introduce the new ruler of the world to their former clients. The co-operation between America and Britain masks the deepest world-wide antagonism between the two powers and is preparing for fearful conflicts, perhaps in the none-too-distant future.

There is no space within the limits of a brief preface to discuss the destiny of America herself. It is clear that nowhere today does capital feel itself so secure as there. American capital has grown enormously, making itself strong first through the war in Europe and now by means of “pacification” and “rehabilitation”. But for all its might American capitalism is not a self-sufficient whole but a part of the world economy. Furthermore, the greater United States industry grows the deeper becomes its dependence on the world market. While driving Europe more and more into a blind alley American capital is preparing wars and revolutionary upheavals which will then strike back at the economy of the United States with a terrible rebound. Such is the perspective for America herself. America occupies only the second place in the line of revolutionary development. The American bourgeoisie have still to watch the great collapse of their elder sister in Europe. But the inescapable hour will strike for American capitalism too. The magnates of the American trusts, the great plantation owners, oil tycoons and exporters, the billionaires of New York, Chicago and San Francisco are irreversibly, if unconsciously, fulfilling their revolutionary function. And the American proletariat will ultimately fulfil theirs.

1. Drawn up in April 1924 by a committee headed by the American financier and general, Charles G. Dawes, later US Vice President in 1925-29. The plan provided for a scale of annual payments of German war reparations and reorganisation of the Reichsbank, and recommended a large foreign loan for Germany.

2. A major American financier, chairman of many companies and US Wheat Director under President Wilson. He had extensive business interests in Europe and received decorations from a number of European states after the First World War.

3. The international organisation of socialist parties formed in 1919 under the leadership of Lenin and the Soviet Communist Party to unite all those groups fighting for a consistent revolutionary Marxist policy. It embarked on a struggle to build new communist parties in opposition to the degenerated reformist organisations of the working class. From 1924 it became transformed into an apparatus to serve the interests of the. bureaucracy in the Soviet Union. It was wound up by Stalin in 1943 as part of his deal with British and US imperialism during the war.

4 John Pierpoint Morgan (1867-1943). Head of the American international banking firm founded by his grandfather, controlling large sections of shipping, railways and steel. Played a leading part in raising loans for the British war effort from 1914 to 1919.