The last reports on Tuesday evening suggested that the Afghan government had suffered a serious setback after a Taliban offensive succeeded in taking control of much of Sangin, a strategic town in the Helmand province. 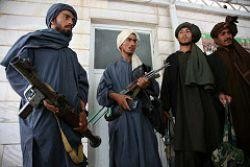 The fall of key locations in and around the town on Sunday and Monday comes just a year after NATO pulled its combat troops out of Afghanistan. Since then the Taliban have made inroads in Helmand and several other regions around the country. The Taliban stormed the police headquarters, the administrative headquarters, the intelligence agency office and other offices in Sangin, but Afghan officials said that their forces, including the air force, were battling to regain control.

The Guardian quoted Mohammad Jan Rasoolyar, Helmand’s deputy governor, who said that insurgents had taken control of all of Sangin, with the exception of the posts of the Afghan army. He said that the army was "now taking the fight to the Taliban". Civilians have been fleeing the town amid continuing bitter fighting. A BBC report says that the Taliban insist their siege of the town is not over "and the government will soon announce their defeat". The head of Helmand's provincial council, Muhammad Kareem Atal, said that 2,000 Afghan security forces personnel had been killed in the province this year. According to the district police commander, Mohammad Dawood, the Taliban had completely cut the facility off from the rest of the province, and food and weapons supplies were running low.

The battle for Sangin came as a Taliban suicide bomber killed six American NATO soldiers at Bagram airport near Kabul on Monday. This was the most deadly attack on NATO troops since August. The bomber rammed an explosives-laden motorcycle into a combined Nato-Afghan foot patrol as it moved through a village close to the base, about 30 miles (50km) north of Kabul. Three rockets were also fired into Kabul overnight on Monday. A Pentagon report published last week acknowledged the strength of the Taliban and warned the security situation would deteriorate further. Reports in the Wall Street Journal said that the SAS and US Special Forces had been deployed to help retake lost ground in the province. Some 12,000 foreign soldiers are deployed in the country as part of the Nato-led Resolute Support international coalition, which is meant to underpin Afghan security forces. Sangin was once the centre of operations for international forces in Afghanistan. The Taliban are also close to overrunning the neighbouring district of Gereshk. In September, the Taliban briefly overran the northern city of Kunduz in one of their biggest victories in 14 years of war.

Regaining full control of this area would increase the Taliban's mobility in parts of northern Helmand and cut a key supply line for Afghan forces with Lashkar Gah, capital of the Helmand province. Sangin is also a rich opium production centre - meaning potential tax revenue for the Taliban from the drugs trade, kidnappings and ransom and other acts of criminal extortion. The province of Helmand produces opium and heroin worth five billion dollars per year and seventy percent of this money goes to the present government administration, which is corrupt to the core and an imperialist stooge.

The revulsion and frustration of government troops is burgeoning following disastrous military operations which locals say wrought unwarranted destruction. These rank-and-file soldiers have not been paid wages for months, they complain of very bad food while the officer caste has five-star meals. Their morale is very low. Some officers are accused of selling weapons to the Taliban. Defections to the Taliban and now also the ISIL affiliates are rising rapidly amongst the so-called Afghan National army. The strategy of winning hearts and minds - once trumpeted by the foreign forces - has ended up in the ‘tormenting of hearts and minds’ of the Afghans. The 13-year Operation Enduring Freedom, which saw more than 900 deaths of international coalition soldiers in Helmand province alone, has been a disastrous failure for the imperialist invasion.

A former major general of the British army, Jonathan Shaw, said that the problem that NATO forces faced in Helmand was deeper than just equipment or resources. “I think it shows the limitations of military intervention,” Shaw told the Guardian. He said that this is part of the bigger question about deposing dictators without necessarily knowing who was going to replace them. He was not surprised to see the Taliban expanding since the Nato withdrawal. Shaw added, “What is the long-term plan? We’ve got the clocks; they have got the time. Anything we impose is transient… “We probably expected a bit much of them. The fault was in the expectation.” Sir William Patey, a former British ambassador to Afghanistan, said that “the government in Kabul would always struggle to control badlands like Helmand province…It was always an optimistic hope that once the coalition had pulled out that Afghanistan forces could hold on to everything.”

This Taliban offensive has been launched just weeks after the ‘Heart of Asia’ conference regarding the stabilization of Afghanistan was held in Islamabad. This conference provided a reality check for the geopolitics of the region. The salience of the conference lies in regional integration through security, connectivity, infrastructure development and trade and investment. The presence of the foreign ministers of ten countries in Islamabad to attend the meeting – including delegates from China and India – testified to the event’s importance in regional politics. Pakistan’s multi-vector foreign policy aims at transforming the country as the hub of regional integration. Indeed, Pakistan enjoys a unique role in the search for Afghan settlement, and its cooperation is crucial due to its links with the Taliban, and the fact that – in spite of its denials – the state gives covert logistical support to and retains a certain level of control over some of the most vicious outfits, such as the Haqqani network. Behind the veils of the diplomatic smiles and hypocritical gestures of wily diplomacy, however, all these powers are in fact pouncing upon Afghanistan like vultures grabbing away its resources. This new offensive in Helmand, which places the Taliban very near to Pakistan’s territory, will inevitably create new rifts and rows between the Pakistani deep state and the US puppet regime of Ashraf Ghani.

In spite of the Taliban’s onslaught on Helmand, and the extension of the so-called fighting season deep into December, there is still talk of seeking an early resumption to negotiations with the Afghan government nonetheless. The government is desperately trying to cling to power and the Taliban are regrouping to take the initiative by capturing territory at this early stage. They rightly anticipate that after the withdrawal of imperialist forces they will be faced with fierce resistance from the forces of ordinary Afghans, and the alibi of fighting the foreign invader in Afghanistan will not be there any more. There are clear signs of ordinary Afghans coming out for the first time to fight for their basic rights and to put an end to the brutalities of the vicious Taliban and the devastations wrought by the imperialist invaders. The uncertainty and bloody internecine conflicts between different sections of the Taliban mafias are also beyond ferocious. The doctrine of ‘Talk and Fight’ or perhaps, more accurately, ‘Fight and Talk’ appears to be the new Taliban strategy – borrowed directly from the pages of the strategy book that US imperialism has been trying to get the Afghan government to implement in recent times. It certainly must be worrying for the administration of President Ashraf Ghani, and his partners and supporters inside and outside Afghanistan, that the Taliban are mimicking state strategy better than the state itself is able to perform it. The continuing Taliban onslaught will also likely further strain intra-administration and inter-institutional tensions in Afghanistan, which are rotten with crime and corruption already. One half of the national unity government is quite openly opposed to the other half`s preference for a negotiated settlement with the Taliban and outreach to Pakistan. Meanwhile, the intelligence apparatus, even after the recent resignation of the NDS chief, remains deeply suspicious of and hostile towards both the Taliban and Pakistan.

The Pakistani state experts and strategists, with events unfolding in Helmand, will try to continue pursuing the twin approach of keeping the lines of communication with Kabul open while nudging the Taliban to the negotiating table, maintaining a depth to their strategy. Afghanistan has been in turbulence for centuries, with invasions wars, destruction and the devastations of the great games played there by imperialists. The masses have suffered for generations on both sides of the Durand Line drawn by British imperialists in 1893. The only short period where the masses were beginning to have some respite was the Saur revolution of 1978. But it was the US imperialists along with the Pakistani state, the Saudis and other Arab monarchies who inflicted a reactionary insurgency upon Afghanistan to crush the revolution that had overthrown capitalism and landlordism, and to stop its spread in the whole region. The radical reforms that were beginning to uplift and transform the lives of the oppressed were having a deep impact, especially amongst the youth and the toilers in central Asia, Iran and Pakistan.

The Taliban and other fundamentalist monsters were the products of this counter-revolutionary strategy. Now they are fighting for the huge swathes of black money generated through the massive drugs smuggling racket and other criminal activity. Their mentors created this financial resource to fund the counter-revolution in Afghanistan. The imperialists and their toady regional despots are responsible for this mess and the destruction of one of the richest cultures in Asia. The rabid bigots in the form of Taliban and other Islamic fundamentalist groupings are out of their control and most have turned into Frankenstein monsters attacking their own master-creators. After fifteen years of imperialist occupation and regimes which have had the sanctity of UN sponsorship, nothing has improved for the ordinary people, and the oppression of women and the human rights record, decried so loudly by Western commentators, have only worsened. Capitalism can in no way develop upon or end primitiveness in Afghanistan. This will only intensify with the unravelling of this conflict and the crisis in the present socio-economic system. However this conflagration and crisis engulfs the whole region, especially the Pashtoons. In Pakistan and Afghanistan the people are tied together in bonds of history, culture, economy and now war. There have been militant demonstrations of youth and workers in Kabul and other cities in recent weeks. These were about the issues of price hikes, unemployment and other socio-economic demands of the masses. It shows another often-concealed aspect of the war-torn Afghanistan. Sharp turns and sudden changes in the situation of the region can explode in a revolutionary upheaval in the coming period. Islamic fundamentalists and the Western-sponsored democracy have only brought more misery to the masses of this unfortunate land. Such a revolution to overthrow this system and put an end to this disastrous bloodshed and human devastation will have to be of regional rather than national dimensions. Now there cannot be two separate revolutions. Imperialist intervention and the spreading of the conflict across the frontiers in itself has eliminated the imposed borders.