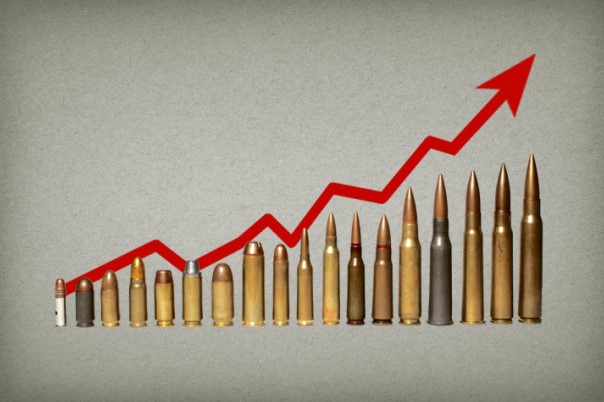 As the war in Ukraine drags on, with the US and British imperialists prolonging the conflict for their own narrow interests, weapons manufacturers are making a killing in extra profits. To end the horrors of war, we must fight to end capitalism.

The war in Ukraine has ushered in a wave of militarism. The western imperialists have poured billions into sending military equipment to Ukraine. And ‘defence’ spending has rocketed across the NATO nations, most notably in Germany.

As a result, in the midst of the devastation, arms manufacturers have hit the jackpot, blinded by dollar signs.

At the outbreak of the conflict, shares in Britain’s BAE Systems rose by 4.8%, to a one-year high. The share prices of US defence giants Lockheed Martin and Raytheon – makers of the Stinger ground-to-air missile and F-35 fighter jet respectively – have also sharply increased.

Even before the war, these manufacturers of death and destruction were raking it in. Whilst the global economy contracted during the pandemic, the arms industry’s profits reached astronomical heights, peaking at $531bn in 2020.

With European countries pledging an additional £170bn in military spending for the years to come, even these eye-watering past profits will pale in comparison to the current boon in business.

The US is set to send 6,500 Javelin anti-tank missiles to Ukraine. Made by Raytheon and Lockheed Martin, each missile costs £66,000, plus an additional £85,000 for the launcher.

Following suit, Britain has donated more than 5,000 Next Generation Light Anti-Tank Weapons, manufactured in Belfast by French defence company Thales. Each of these costs approximately £30,000.

In other words, whilst western imperialism fights out its proxy war with Russia to the last drop of Ukrainian blood, profiteering arms producers will make a killing.

Whilst millions of ordinary people across the world look on the crisis in Ukraine with consternation, arms manufacturers spy an opportunity.

This is hardly a cause for surprise. Even before the outbreak of war, Raytheon CEO Greg Hayes cited “tensions in Eastern Europe” as a factor from which the company will benefit. 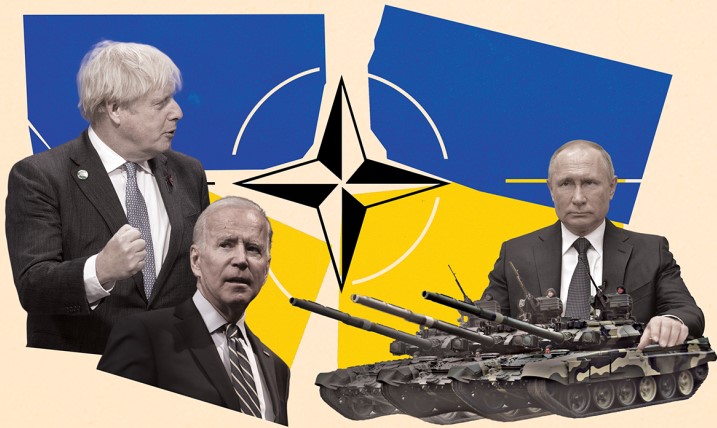 From Biden’s PR trip to a Lockheed Martin factory, to bellicose Boris’ photo-op at the Thales weapons factory, we are being told by our ruling class to learn to love the bomb / Image: Socialist Appeal

Since the Ukraine war began, the jubilation of these crooks has been thinly concealed. And in true Orwellian fashion, western politicians have formed an orderly queue to assure us that fuelling the war machine will bring peace.

From Biden’s PR trip to a Lockheed Martin factory to tell those in the facility that they are aiding the fight for freedom; to bellicose Boris’ photo-op at the Thales weapons factory in Belfast: we are being told by our ruling class to stop worrying about the war, and to learn to love the bomb.

It is not only the war in Ukraine that is bolstering the demand for weapons, however. Arms shareholder dividends are also being boosted by increased military spending by various regimes and governments across the world.

Boris Johnson recently visited India, for example, in order to strengthen defence ties with the Modi regime. Exaggerating the ‘failures’ of Russian advances, including the supposed ‘chink in Russia’s armour’, the British Prime Minister touted the military equipment of UK arms producers such as BAE Systems and Rolls Royce.

By hook or by crook, Boris understands that if there is business to be made, better to make it British business. The cynicism of the imperialists knows no bounds.

At first, the distraction of war appeared to work wonders for the beleaguered PM. But now it is primarily his internal opponents who are benefitting from this jingoism, with prospective leadership challengers utilising the conflict to push their own career ambitions, following Johnson’s Pyrrhic victory in the recent confidence vote amongst Tory MPs. 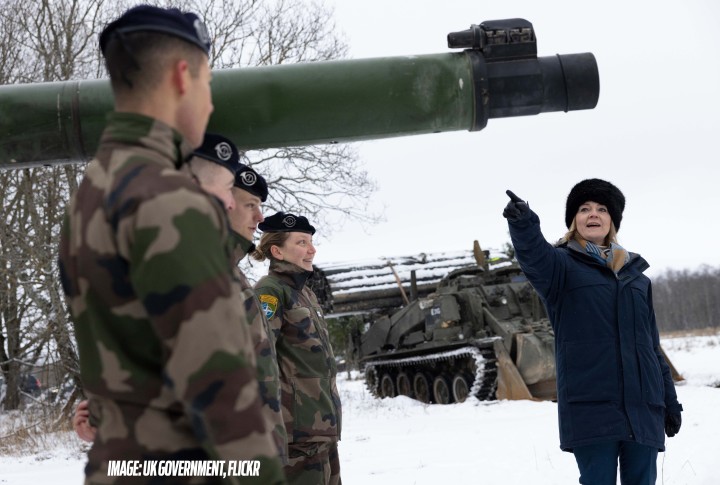 Tories such as Liz Truss are using the conflict to push their own career ambitions, competing to take the 'hardest line' against Putin / Image: Socialist Appeal

The war is not only generating profits for the bosses, but also a groundswell of portfolios for those after the Tory leader’s job. Those willing to take the ‘hardest’ line against Putin’s Russia – promising to ‘Make Britain Great Again’ – stand in good stead.

Ben Wallace, the Tory defence secretary, has been applying pressure for military expenditure to be raised to address an increasingly “dangerous” world situation. Similarly, foreign secretary Liz Truss, another budding leadership hopeful, has argued that NATO’s 2% defence spending target must be the “floor, not the ceiling”.

Elsewhere, Tom Tugendhat and Tobias Ellwood – aspiring Tory MPs from military backgrounds – have both opined that more must be pumped into this proxy war.

Needless to say, these warmongers are not motivated by humanitarian considerations. Rather they are driven by their own careerist interests; by deluded fantasies of reestablishing British imperialism as a major player on the international stage; and by a desire to play the part of loyal poodle to Washington.

The war has driven up inflation, putting millions of families on the breadline. Yet the Tories are actively helping to prolong the war, for their own interests, deepening the cost-of-living crisis faced by working-class households. 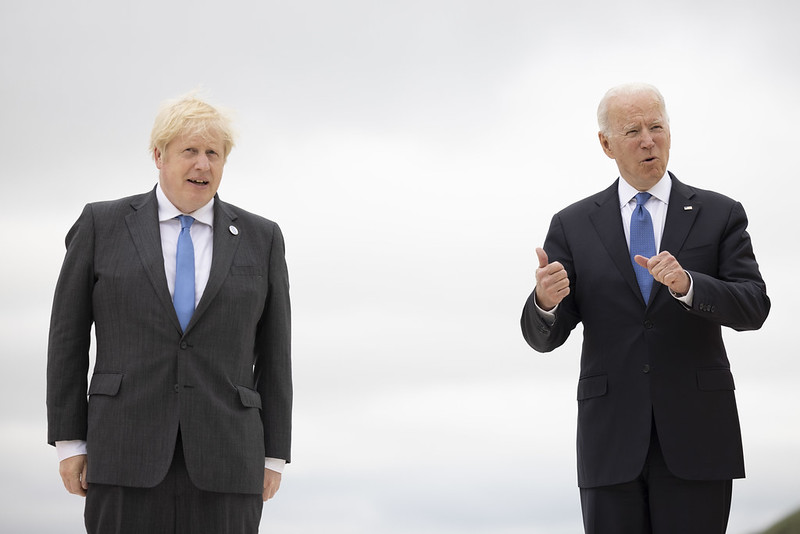 Britain has (so far) committed £1.3bn specifically in military support to Ukraine. Many look upon this spectacle not with flag-waving fervour, but with frustration at what a colossal waste of money and resources it represents.

Ordinary people are rightly incensed that public money is being thrown into the arms trade. This demonstrates clearly that the money does exist in society for decent housing, education, healthcare, and more – it is simply in the wrong hands.

But from the perspective of British imperialism, this is money well-spent. What would be a waste for these hawks, in fact, would be if the British ruling class missed this opportunity to flex its ailing muscles on the world stage; to prove its junior partnership credentials to US imperialism; and for home-grown arms companies to make a tidy profit.

We should expect nothing less from these scoundrels. No amount of moral pressure on the Tories will make them curb the profiteering, or stop them fanning the flames of war. 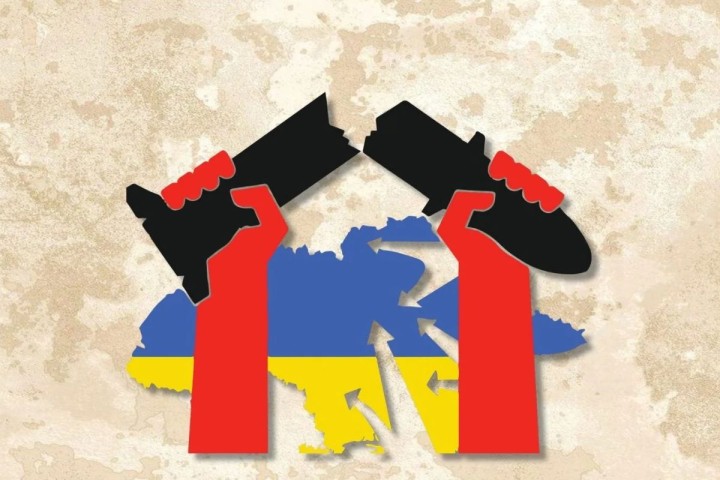 The conflict in Ukraine, at root, is a proxy war between different imperialist powers vying for power, prestige, and profit / Image: Socialist Appeal

After all, their entire raison d’être is to protect the profits and interests of British big business; to defend and represent the very system that is responsible for war and all its horrors.

The conflict in Ukraine, at root, is a proxy war between different imperialist powers; a consequence of capitalist nations vying for power, prestige, and profit.

As Lenin explained: Yes, war is terrible – terribly profitable. To end the destruction of war, and the shameless profiteering that accompanies it, we must organise and fight to overthrow the system that spawns this: capitalism.

Originally published on 23 June at socialist.net |