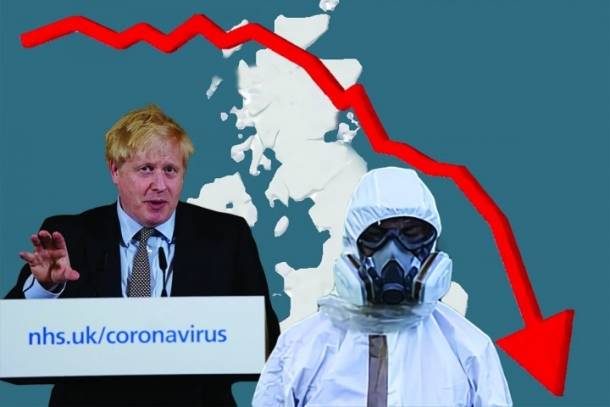 Faced with the prospect of overseeing a deadly disaster, the British Prime Minister has changed track from his original laissez-faire COVID-19 strategy. But Boris Johnson’s government has no clue of where to go next. We are entering uncharted waters.

“The idea of controlling a virus like this, while still having a vaguely normal society does put us in uncharted territory... We may well be ending up in a really quite different world for at least a year or more.”

These are the words of Professor Neil Ferguson, one of the leading scientists advising the government on its response to the coronavirus pandemic. His statement is a stark admission of the crisis that is wreaking havoc on society.

We have truly entered a new epoch – one that will feel like wartime for ordinary people. In Britain alone, thousands of lives will be tragically lost. The economy is already in an uncontrollable tailspin. Millions of jobs are at risk, with no lifeline for working-class families.

But instead of taking urgent action, the Tory government is acting like a rabbit in the headlights. The incompetence of Boris Johnson and his ministers shows no bounds. The Prime Minister’s cavalier attitude, however, comes with a deadly price.

Head in the sand

From day one, the Tories have dragged their heels. The virus spreads exponentially. That means the situation can, and will, change extremely rapidly, even by the day. The warning signs – in China, Italy, and elsewhere – were plain for all to see. But Downing Street has clearly done nothing to prepare for what lies ahead.

Boris Johnson has repeatedly buried his head in the sand, refusing to explain the severity of the situation to the public. Indeed, the government has actively hidden the truth, with the Tory leader veering between callous comments and jocular remarks.

Public health experts have been clear from the beginning: countries should be taking immediate and bold steps to tackle the epidemic. World Health Organisation (WHO) advice has been to “test, test, test” in order to identify, track, and quarantine those infected, in combination with sweeping measures such as school shutdowns, social distancing, and self-isolation.

The UK has NOT done and certainly not continued population surveillance and testing and contact tracing. Health workers cannot get tests. Our local authorities, voluntary sector and communities have not been properly mobilised. (6)

But taking such “draconian” measures, Johnson stated, was unnecessary. Instead, he casually suggested that people should just “take it on the chin”.

The initial ‘plan’, therefore, as far as there was one, was essentially to do nothing and allow the virus to ‘let rip’ through the population. The hope was that this would allow ‘herd immunity’ to develop, protecting people from future outbreaks.

Of course, families would “lose loved ones” in the process, the PM bluntly asserted. But this was seen as reasonable collateral damage by Johnson in the effort to fight the disease.

The reason for this stony-hearted strategy was obvious: the Tories put profit before people.

In this respect, the Prime Minister is an apt representative of the capitalist class that he represents: short-sighted, arrogant, and cold to the core.

Even now, in this time of dire crisis, he continues to play the role of court jester. In a recent meeting with CEOs, for example, Johnson quipped that a plan for businesses to produce much-needed ventilators could be called “Operation Last Gasp”.

But his Etonian hubris – typical of the British ruling class – is no laughing matter. Indeed, his ‘plan’ has now dramatically exploded – and it is workers and the poor who will be hit hard by the debris.

The story is shocking; almost surreal. The government’s do-nothing ‘herd immunity’ proposal was based on epidemiological models that suggested relatively low mortality rates amongst those infected. Some would die, but the out-of-touch establishment deemed this to be a price worth paying for avoiding any economic shutdown and protecting the profits of big business.

But now a recent study by the COVID-19 response research team at Imperial College London (ICL) has revealed that original estimates were based on a deeply flawed assumption: that demand for critical care facilities would be much lower than it has turned out to be.

The outcome of this error is that NHS intensive care units will be overwhelmed; thousands of patients will not receive the treatment needed; and mortality rates will surge. Rather than thousands dying, it could be a case of hundreds of thousands losing their lives.

Doing absolutely nothing, the ICL academics concluded, would see half-a-million die. Under the government’s ‘herd-immunity’ plan, with some mitigation measures to ‘flatten the curve’, the number of deaths “would still be in the order of 250,000”, Ferguson’s team stated.

It appears that this model, now known to have been badly wrong, had more influence on UK government disease control policy than the advice of the WHO, and the experience of China, South Korea, Taiwan and Singapore.

Of course, one could blame the academic ‘experts’ for their fatally flawed models. But any sensible decision maker will tell you that all models are imperfect. The point is that this model gave results that chimed with what the aloof and heartless Tory Prime Minister wanted to hear.

Many other public health scientists across the world – including WHO officials – were screaming out against this laissez-faire approach. But, as the Bible says, there are none so blind as those who will not see.

Faced with such a deep disaster, Johnson’s government has been forced to make a volte-face. Hence yesterday’s announcement of further measures to prevent the spread of the disease, including advice for people to self-isolate and avoid as much social contact as possible.

In short, we have moved from a strategy of ‘mitigation’ to ‘suppression’. Now the idea is to try and contain the disease, as has been done to various degrees of success in several East Asian countries.

But infectious disease cannot be so easily controlled. Had immediate steps been taken – as was entirely possible, given the knowledge of what had taken place in preceding places – the virus could have been managed. Known cases could have been tracked and quarantined.

Instead, we have now reached (or in fact gone far beyond) a critical mass, when infections spread uncontrollably in a runaway chain reaction. Suppression can help to push the numbers back down. But even then a proper identification, tracking, and quarantining strategy still needs to be put in place.

Although the Prime Minister has belatedly changed track, his latest proposals are still extremely half-hearted, falling well short of what is required. Instead of officially shutting down all bars, restaurants, cinemas, etc., the government is now merely “advising” people not to go to these places. 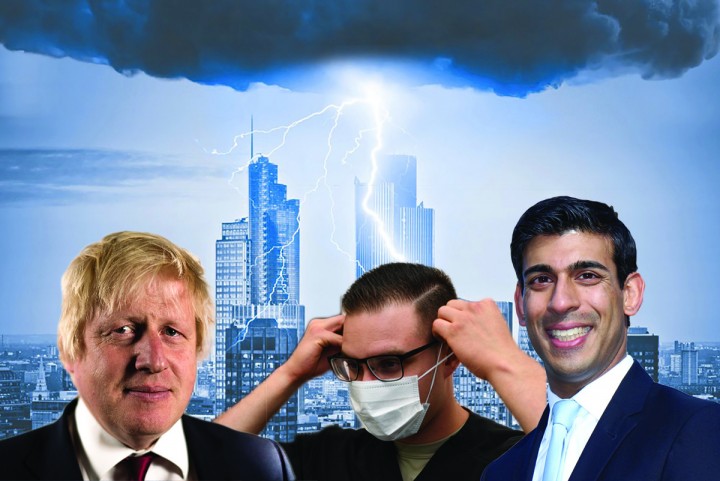 The market system has fundamentally broken down. What is required is wide-ranging nationalisation and bold steps to take control of the economy and begin planning production / Image: Socialist Appeal

Again, the reason is clear: by only offering advice, and not taking action, it is ordinary people who end up shouldering the burden. Had the government given an order, many small businesses could have claimed compensation. But ‘advice’ means that people voluntarily choose not to go, and so insurance policies do not come into effect.

The result is that Britain’s £120 billion hospitality industry now faces an existential threat. Unite the Union estimates that at least one-third of jobs in the sector could go, with many workers on zero-hour contracts or denied proper sick pay. In short, the Prime Minister has saved the big insurance firms by presenting workers and small businesses with the bill.

With the airline industry also plummeting, and high-street chains dropping like flies, it is clear that the troubles in the hospitality and entertainment sectors are only the tip of a very large iceberg.

Rishi Sunak, the new Tory chancellor, will no doubt wish he hadn’t taken the job. Sunak’s Budget announcement of last week is already hopelessly out-of-date. His proposals included £12 billion to address the impacts of the epidemic in Britain. Elsewhere, the Bank of England has slashed interest rates. But even bourgeois economists are now recognising that this is like firing a pea-shooter at a juggernaut.

Under pressure, the government has made a number of concessions: providing more assurance on sick pay; reducing universal credit waiting times; and directing funds towards pubs and clubs affected by new social-distancing recommendations. But such half-measures are nothing in the face of the tsunami that is about to hit society.

Even Tory grandees, therefore, are calling for the government to step in and save the system. Lord O’Neill, for example, a former Conservative minister at the Treasury, has suggested introducing a “People’s Quantitative Easing” to funnel cash towards struggling households and businesses.

Elsewhere, the head of the Office for Budget Responsibility has stated that the country faces a “wartime situation”, requiring a massive expansion of government spending – not just a sprinkling of stimulus here and there.

The world economy is in freefall. We face a paralysing depression, with predictions of a 15% contraction in Britain in the quarter ahead. The market system has fundamentally broken down. What is required – as any genuine war effort demands – is wide-ranging nationalisation and bold steps to take control of the economy and begin planning production.

In the long run, however, even the suppression strategy being pursued is not enough. “We emphasise that is not at all certain that suppression will succeed long term,” the recent ICL paper states. “Ultimately the only hope of genuinely eradicating the disease lies in developing a vaccine.”

But such a vaccine could be over a year away. Some – including Ferguson’s ICL team – say over 18 months. In the meantime, the world faces warlike levels of economic and social dislocation. Our lives will be fundamentally different for the foreseeable future, with no end in sight. In the days and weeks ahead, therefore, people will quickly be forced to adapt to this ‘new normality’.

Even when (if) the dust settles, therefore, there is no going back to the past. Things have irreversibly changed forever. The only way forward for humanity is to do away with capitalism and fight for socialist revolution.