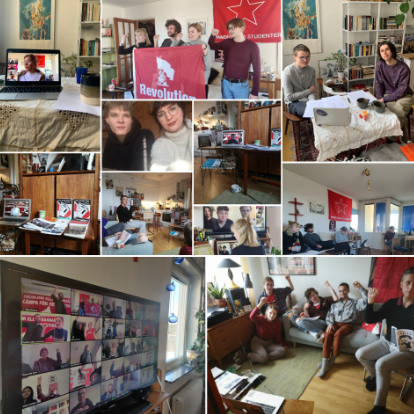 Underfunding and lack of equipment had already thrown the Swedish health care into a crisis before the pandemic. With little to no measures to stop the spread, there is a clear risk of a catastrophe. As workers respond to the crisis, we can expect a sharp rise in the class struggle in the coming weeks and months. This set the tone for the biggest congress ever of Revolution, the Swedish section of the IMT – with 100 Marxists present online from all over the country.

Comrades from Stockholm, Gothenburg, Malmö, Lund, Helsingborg, Halmstad, Umeå and more joined in – along with visitors from Norway and Finland – to discuss the acute crisis that has opened up worldwide and in Sweden, and how to respond to it. The mood was energetic and focused as everyone understood more clearly than ever the need to build a revolutionary Marxist organisation to rid us of the barbarism that capitalism has to offer.

Sweden has the lowest number of hospital beds per 1,000 people in the entire OECD, and the second-lowest number of ICU beds in the EU. This is the result of 30 years of cuts and privatisation, where 40 percent of healthcare centres now are privately owned. Deregulation and privatisation of the state farmacy has disrupted the provision of medical equipment, direly needed in the present situation.

In her lead-off on perspectives for the Swedish revolution, Ylva Vinberg explained:

“Already before the coronavirus pandemic there were daily reports of patients dying due to not receiving medical attention in time, nurses and midwives who cried leaving work, nurses working 24 hours in a row and whole sections of hospitals closing down due to lack of staff. The situation was already on the verge of a breakdown.”

This was confirmed by Prime Minister Stefan Löfven recently, when he said that “we are going to count the numbers of deaths in the thousands – we might as well get prepared for it”.

Meanwhile, the Swedish government is almost internationally unique in its refusal to carry out any serious measures to stop the spread of the virus. Restaurants, bars – even ski resorts – remain open! For a long time the only real upper limit for gatherings was for 500 people, now changed to 50 people – though private parties, gyms, restaurants, etc. are not included. Needless to say, there’s been no talk of closing down non-essential production.

Valdar Malmsten, who works at a hospital in Stockholm, described the situation aptly:

“The real meaning of the strategy of the government is to let the elderly and high-risk groups die, in the hope of achieving herd immunity and coming out of the crisis quicker than others. These lives are sacrificed by the bourgeoisie and government to get a competitive advantage. The Swedish strategy paves the way for a real disaster.”

Perspectives for the world revolution

Niklas Albin Svensson, editor of In Defence of Marxism, joined the meeting from London. In his lead off on perspectives for the world revolution, he explained:

“The entire political make-up that has existed ever since the 1970s has been questioned around the world since the crisis of 2008. But all the instability that belonged to the past period, will in hindsight be seen as a historic prelude.”

Hundreds of thousands of workers have already paid with their lives globally for the incapability of capitalism to provide decent health care and safety equipment. Commenting on the situation in Italy, Heikki Moisio made clear that:

“The government is closing everything – except those things that the companies need to maintain their profits. There’s been a wave of strikes in Italy around the demand of closing down non-essential production with full pay, where the comrades of Rivoluzione [the IMT in Italy] played an important role. While union leaders were dragging their feet, the response from workers was instant.”

This wave of strikes is of course not limited to Italy. In a contribution on the situation in France, Alexandra Bryngelsson pointed out:

“Even though Macron has tried to appeal to a sense of national unity, there’s an enormous pent up anger. Just like everywhere else, the workers are asking: with all the potential of production – how can there be no safety equipment? How can there be tight regulations for everything – except for our working environment? Strikes have already broken out in several sectors for temporary business closures and to demand protection measures worthy of that name.”

The workers are being asked to pay many times over. Not only with their health and the lives of loved ones right now, but also for the unprecedented crisis of capitalism that is now unfolding. While doing precious little to help workers losing their income, governments are giving massive handouts to big business.

The Swedish government is no exception. In order to save the profits of the bourgeoisie, the government has handed packages worth 58 billion euros (13 percent of GDP) to the companies – plus an extra 127 billion euros of liquidity support through the central bank. Meanwhile, in the “biggest crisis package ever to this sector”, the massively underfunded welfare has gotten a bit less than 2 billion euros to split between hospitals, schools, elderly care, etc. This shows the priorities of our so-called “social-democratic” government.

The capitalists are clearly worried about what the pandemic will lead to. Jacob Wallenberg, head of one of the richest and oldest capitalist families in Sweden, recently said in an interview that he is “mortally afraid of the consequences this will have for society”. He predicts that if the crisis is prolonged, it could mean an unemployment of 20–30 percent. In such a scenario he said that “it will mean social unrest, violence and socio-economic consequences, dramatic unemployment.”

So far, most Swedish workers still trust the government, at least to some extent. The Social Democrats have even risen in the polls. But very soon the constant arrogant reassurances from the prime minister Stefan Löfven and the state epidemiologist that they are the smart ones, that the rest of the world are doing it wrong, will turn against them. The death toll is mounting and once the catastrophe becomes obvious the trust will turn into rage.

In the hospitals, there’s already a massive radicalisation taking place. Jannis Tsiamis, who works at a hospital in Stockholm, reported on a Facebook group of hospital workers who want to fight for decent safety equipment, that in a matter of days reached 60,000 members. A post from a hospital worker on 30 March that received over 5,000 likes, read:

“Who the hell among us who are in the middle of this catastrophe wants applause and to hear that we are worth something? We want decent pay, better hours and DECENT MASKS. No police have to do an intervention without body armor, instead getting an order from his boss to put on a thick sweater because it protects him just as well. No firefighter has to fight fires in shorts and a sweater – they have their safety equipment. But we, who right now have one of the most dangerous jobs in the world, get a small piece of silk to protect our mouths and a pat on the shoulder, while being expected to save everybody but ourselves! We hospital workers are not even worth the dirt under the shoes of those in charge. They’ve made that very clear!”

This expresses the mood of a larger and larger layer of workers. At the same time, the unions and more or less every political party have rallied behind the government.

In this situation, the congress of the Swedish Marxists was all the more important. With 100 participants, it was the biggest ever. More than 30 comrades intervened in the lively discussions, covering perspectives for the world revolution, perspectives for the Swedish revolution, a much-appreciated international report on the work of the IMT and the building of the Marxist Tendency in Sweden. The discussions, but also the amazing results in the financial appeal on Saturday night, showed the enormous strengthening of the organisation in the past year.

Revolution has now launched an appeal, #livförevinst (#livesbeforeprofit), with immediate demands to solve the catastrophic situation in healthcare.

We have now moved all our activities online. Together with Marxistiska Studenter (Marxist students), Revolution has launched reading groups across the country online. The reading groups started by Marxistiska studenter in different areas so far are:

But regardless of where you live in the country, you can join either one of these.

Every Sunday at 7pm (Swedish time), we host livestreams on Sweden, the coronavirus and the capitalist crisis, lessons from the international class struggle, and much more.

The need for a revolutionary Marxist tendency has never been greater. Join us, and help us build it!