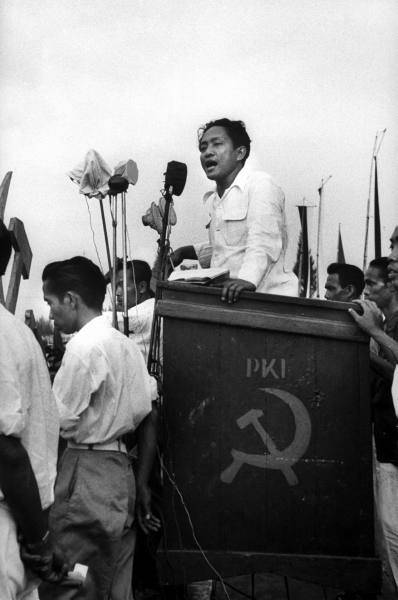 Today, 45 years ago, on the 22nd November 1965, Dipa Nusantara Aidit, leader of the Communist Party of Indonesia was executed in the aftermath of the coup by General Suharto. In the anti-communist purges that followed up to a total one million Indonesian communists were killed.

In the early sixties, the Communist Party of Indonesia (PKI) had grown into a huge party with more than three million members. With its mass support, the party had actual power in its hands. The Stalinist leadership of the PKI, however, opted for a programme of capitalist development in alliance with the "progressive bourgeoisie" rather than a programme of struggle for socialism (the disastrous two-stage theory).

Because of the vacillations of the PKI leaders a bloodbath could not be avoided. On September 30, 1965, six generals of the Indonesian army were killed. This gave the signal for the coup. General Suharto immediately spread a horror story on TV and radio claiming that communist women were responsible for the murder of the generals and the mutilation of their bodies. Later it was proved with ample evidence that the Communists had nothing to do with this killing. But the accusation of PKI complicity served, of course, the perpetrators of the coup and their supporters. Suharto started a real manhunt in which an estimated one million communists were slaughtered (estimates range from 500,000 to two million victims). Anyone who was suspected of links with the PKI or sympathies for communism was struck. The exact role of U.S. intelligence has still not been clarified. It is nevertheless certain that the lists of the names of alleged Communists were given by the Americans to the Suharto dictatorship and that the “embassy” supported the coup in various ways.

In the documentary Shadow Play (2001), the Australian director Chris Hilton gives a fascinating overview of the events in 1965 and can be viewed online