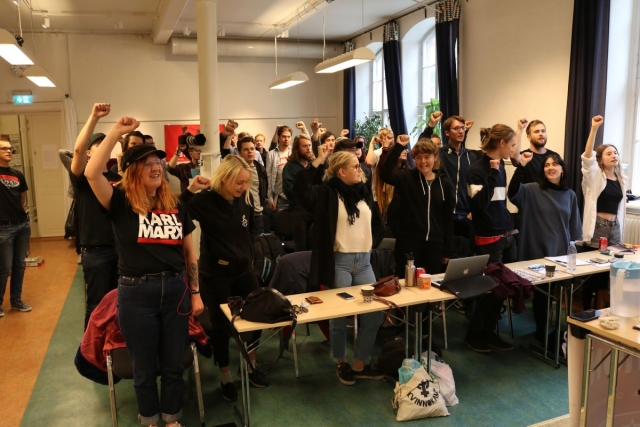 The Revolution 2017 school was held in Göteborg on the 6-8 October – a weekend dedicated to the 100-year anniversary of the Russian Revolution. With 65 participants, great talks with a high political level, and a huge collection of 95,000 Swedish kronor, this was an important milestone in the building of the International Marxist Tendency.

Throughout the whole weekend there was enormous enthusiasm on display. This was the best-organised and largest Marxist school the Swedish section of IMT has ever held, with better political discussions than ever before. Present at Göteborg were participants from Stockholm, Malmö, Lund, Helsingborg, Halmstad, Umeå, Piteå and Jönköping. We also had visits from comrades from both the UK and Norway. All those in attendance have now returned home with a burning desire to build the forces of Marxism and carry on the legacy of the Russian Revolution and the Bolsheviks.

The weekend started on Friday evening with a well-attended public meeting. Niklas Albin Svensson of the IMT began a discussion on the subject of "Capitalism's death struggle and the socialist world revolution". Ten years after the crisis in 2008 nothing has been resolved, and Niklas gave many examples of the turbulent economic, social and political situation that we see in the whole world. The capitalist system can no longer develop the productive forces, and this can be seen in things like mass unemployment and huge debt levels worldwide. 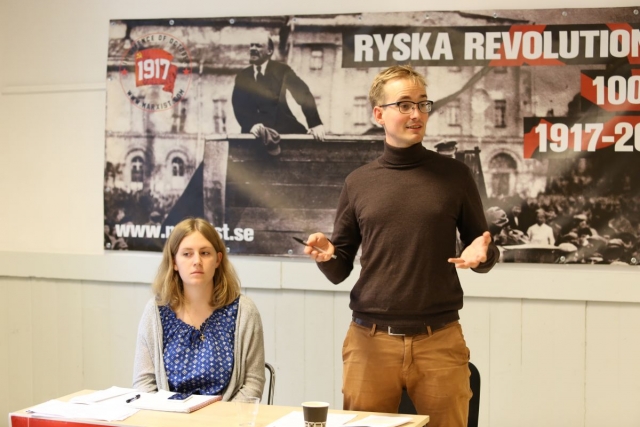 The only solution from the ruling class is to try and get the working-class to pay, through cuts and repeated attacks on workers' living conditions. Although we have seen everywhere in the world how the working-class leadership did its utmost to hold back the revolutionary process, fighting breaks out everywhere, from Catalonia in Spain, to the United States, France and South Africa.

In the discussion, numerous examples of instability and class struggle were raised. Millions of people have engaged enthusiastically in mass movements behind leaders and parties like Corbyn, Mélenchon and Podemos, while the traditional parties are in crisis.

In order for the fight to succeed, we need a socialist revolution. Our task is to struggle for revolutionary Marxist parties to be formed in all countries. That is the only guarantee we have that the huge class struggles we witness will lead to victorious revolutions.

The Marxist view of history, morality and the October Revolution

The first of Saturday's sessions concerned Marxism’s view of history. Fredrik Albin Svensson explained that Marxists are not idealists, but materialists. This means that people's existence and life – and ultimately their means of survival and reproduction – are what shapes their ideas.

Marx and Engels wrote in the Communist Manifesto that the history of all societies is the history of class struggle. Long periods where seemingly nothing happens, where frustration, dissatisfaction and anger builds up under the surface, are then released in sudden waves of class struggle, in revolutionary periods, where all the institutions and ideas of society are questioned, and people begin trying to change society. It is precisely such a period we have now entered.

Their moral and ours

The session after lunch concerned Trotsky's text, Their morals and ours, with the lead-off delivered by Niklas Albin Svensson. He explained that the bourgeoisie are constantly accusing Marxists of being immoral and violent, while conducting cutbacks that lead to suffering and huge numbers of deaths, starting wars that kill hundreds of thousands of civilians, and patenting vital medicines at prices that are impossible for most people to pay. The hounding of people on sick leave increases every year, while no one objects that the royal family lives on subsidies.

In normal situations the ruling class's morality dominates society: universal, accepted and hypocritical. But at the outbreak of class struggle it changes. One example that was raised in the discussion were how people who participated in the Egyptian Revolution of 2011 said the streets had never been cleaner than when the masses flocked to the Tahrir Square, despite the chaos that allegedly prevailed. At that moment people felt that the streets belonged to them for the first time, and didn’t want to litter. In conclusion, we discussed how our morals are always based on the class struggle. Our moral compass is determined by raising the consciousness of the working-class, because the struggle for socialism is the only thing that can guarantee a future for the whole of humanity.

This autumn we celebrate the 100 year anniversary of the October Revolution, which was what the final session on Saturday was about. Stefan Kangas led-off in this meeting. He explained how the February Revolution, which ousted the Tsar in early 1917, led to the situation of there being two powers in society: a dual power in the form of a self-appointed, bourgeois provisonal government and the Soviets formed and led by the working-class. But a situation of dual power cannot last for  long because one class sooner or later must defeat the other.

During the months following the February Revolution, the masses became increasingly aware that the provisional government and Soviet reformist leadership could not solve any of their fundamental problems – the war, the question of land reform and the lack of food. The Bolsheviks, who advocated that the Soviets should take power, quickly grew and won the majority in September by arguing for a second revolution and the working-class taking power. Before the Second Soviet Congress in October, the Winter Palace was stormed, the provisional government arrested and working-class rule established.

Exactly one hundred years ago the Russian working-class took control of their own destiny. For the first time in world history the slaves broke their chains – and won. This is what the ruling class can never forgive.

This shows how it is not ideas that change the world, but that some ideas can have influence depending on the specific material conditions. The objective situation allowed the workers to go into battle, but it was the Bolshevik Party and its correct policies that guaranteed the success of the revolution. This shows how vital the question of leadership is. The October Revolution could never have been carried out unless Lenin built the Bolshevik Party for many years before the revolution. It is therefore of the utmost importance that we build the forces of Marxism today to ensure a successful socialist revolution in Sweden and other countries.

Saturday was then concluded by an impressive collection, where comrades and sympathizers scrambled donations of over 95,000 kronor (9500 EUR) to the IMT and Revolution. This money directly contributes to the struggle of building the forces of Marxism on a world scale. In the evening a revolutionary celebration was organized where the discussions continued and songs such as “De mördades fria republik”, “Staten och kapitalet” and “Bella ciao” were sung. 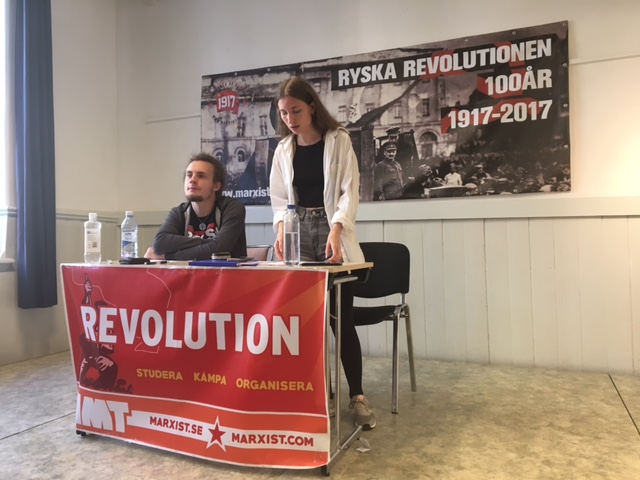 Sunday morning started with a session devoted to working-class power and soviets, lead off by Ylva Vinberg. She explained how different forms of working-class power, such as workers’ councils, factory committees or the like, have always arisen in revolutionary situations as part of the class struggle. They can occur in different ways and in different forms, but the main thing is that they arise as organizations of and for the workers. The most advanced form so far is the soviet, the Russian word for "workers’ council", where the workers themselves elect their representatives, who have no special privileges and receive an ordinary worker's wage. These can develop into a workers’ state that can destroy and replace the bourgeois state and begin the building of socialism.

The afternoon ended with a session about the "Building of the Communist International". Stefan Kangas explained in his introduction the rise and fall of the first two internationals, as well as the construction of the third international – the Comintern – and its Stalinist degeneration, which led to it finally being dissolved in 1943. The early international was built under the leadership of Lenin and Trotsky as a tool for the socialist world revolution, but became increasingly undermined by Stalinism and the Soviet bureaucracy who used it as a tool for their interests in foreign policy.

The International Left Opposition fought under Trotsky's leadership against this degeneration and for the revolutionary movement to take up the ideas of Lenin and the Bolshevik Party. No tendency has ever been so persecuted as Marxism (so-called Trotskyism) was on a global scale after the stalinist degeneration of the Soviet Union, and thus of the Comintern. The Soviet bureaucracy could not answer the Trotskyists politically and therefore pursued a witch hunt against the Bolsheviks, who actually stood on a Marxist basis and thus posed a threat to them. Many were put in prison or in labor camps where they disappeared or were executed. Trotsky himself was assassinated by a Stalinist agent. As Stefan Kangas expressed it, there is a river of blood separating genuine Marxism from Stalinism.

Today we see a new socialist consciousness beginning to emerge, and thousands of people worldwide are being radicalized. What Trotsky described as the revolutionary molecular process is happening before our eyes. Class struggles have broken out all over the world, and as the crisis deepens and draws the world into its maelstrom, the class struggle will also harden. The working-class is bigger and more powerful today than ever before.

We are building the forces of Marxism to be able to reach out with the ideas that the working-class will need to once and for all abolish capitalism.

A storm is coming, but armed with the ideas of Marxism we have the tailwind. Or as one comrade put it: “It’s a wonderful time to be revolutionary.” With the enthusiasm we felt this weekend we are continuing to build the Marxist tendency in Sweden and internationally. Get organized with the IMT and join the struggle for a new society, free from capitalist barbarism.

Forward to the world socialist revolution!