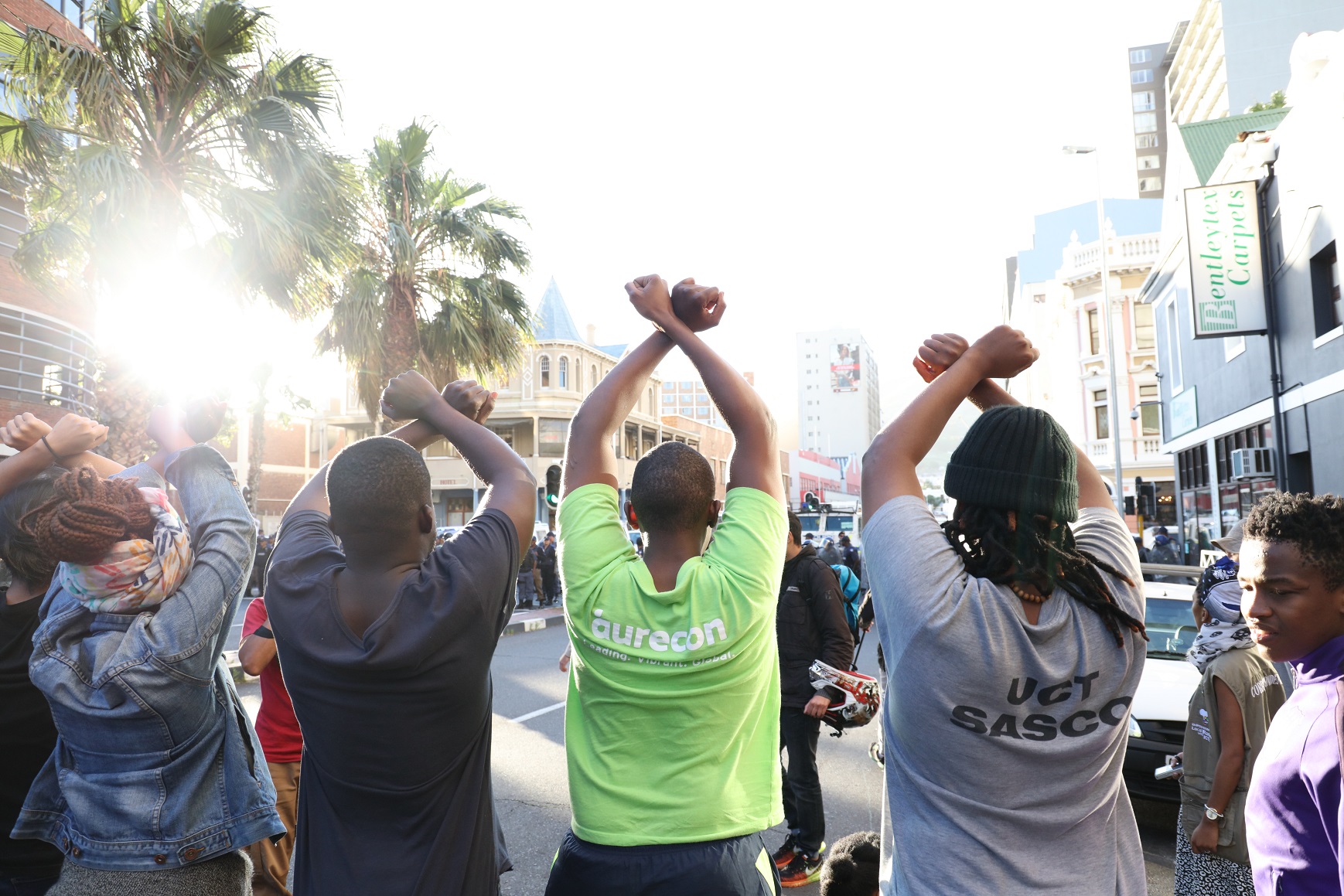 Since the start of the academic year, there has once again been a major upsurge of mass protests at nearly all universities in South Africa. These protests are a continuation of the mass movement in the universities in 2015 around the issues of affordability of higher education.

The so-called ‘born free generation’ (those born after the fall of the apartheid regime) are not leaving their fate to the politicians and leaders from the ‘liberation’ era. These leaders long ago adapted themselves to life under capitalism. The youth are taking matters into their own hands and they are now among some of the most politically active layers in society. Essentially, this reflects the dead end of capitalism in South Africa and a desire of a layer of middle-class and working-class students to embark on the road of class struggle.

In these struggles, the students have achieved some important victories. The latest is the announcement by the Department for Higher Education that nearly one billion rand will be allocated to the National Student Financial Aid Scheme (NSFAS) to write off the historic debt for some 52,000 students. This is a genuine victory for the movement and will come as a big relief to these students. Because of outstanding tuition fees, some of these students were either unable to register for the new academic year or were unable to graduate and therefore apply for employment. This new concession could therefore be a major change to the lives of many students.

The students have disrupted the status quo and shaken the political establishment to the core / Image: Discott

Another important concession was when the government introduced a national bursary scheme for poor and working-class students in 2018. This scheme, which is now being introduced progressively over a five-year period, means that any first-year student that qualifies for this category will not pay any tuition fees for the duration of their studies. In the 2018 budget speech, Finance Minister Malusi Gigaba announced that an additional 57 billion rand over the next three years had been allocated to fund students who come from families with a combined income of 350,000 rand. This is on top of the 10 billion rand that was provisionally allocated in the 2017 budget.

According to the budget statement, more than 340,000 students at universities and over 420,000 full-time equivalent students at Technical and Vocational Education and Training colleges will be funded through this new bursary scheme from 2018.

These concessions are very important and have been attained by the courageous struggles of the students. They come in the face of brutal state repression. Many have been prosecuted by the state for their involvement in these struggles. But this has failed to halt the process. The students have disrupted the status quo and through mass action have shaken the political establishment to the core.

However, as is always the case under capitalism, what is given with one hand is taken away with the other. Instead of letting the rich pay, the ‘pro-poor’ government is putting the entire burden on the shoulders of the working class. In fact, since Ramaphosa took over, the rich have had it even better. They are not paying any additional tax, including on capital gains and dividends. The rate of tax on trusts and on companies has also remained unchanged. In addition, transfer duties on the sale of properties have remained unchanged. On top of all this, the rich are now allowed to move an additional 500 million rand abroad because of looser exchange controls. This will make it easier for the fat cats to take their loot out of the country. This clearly shows on which side of the class divide our billionaire president is.

No, it is not the rich who pay but the poor. To fund these measures the government increased the Value Added Tax (which hits the poor hardest) and made significant cuts in government expenditure. Cuts were made in provincial conditional grants, such as those for school infrastructure backlogs, general education infrastructure, housing development and in provincial roads maintenance. Cuts were also made to the municipal infrastructure grant, the integrated national electrification programme grant, the urban settlements development grant and the public transport network grant.

This means a severe cut in services, which will affect the working class and the poor directly. In other words, this is not ‘free education’ as the government claims. To call it such just shows the cynicism of the government. Rather, what we have here is an attempt to kick for touch in order to manoeuvre and gain some sense of political stability. But this is not working. Every day, it is hit by a scandal which shows the instability of South African capitalism.

A crisis of the capitalist system 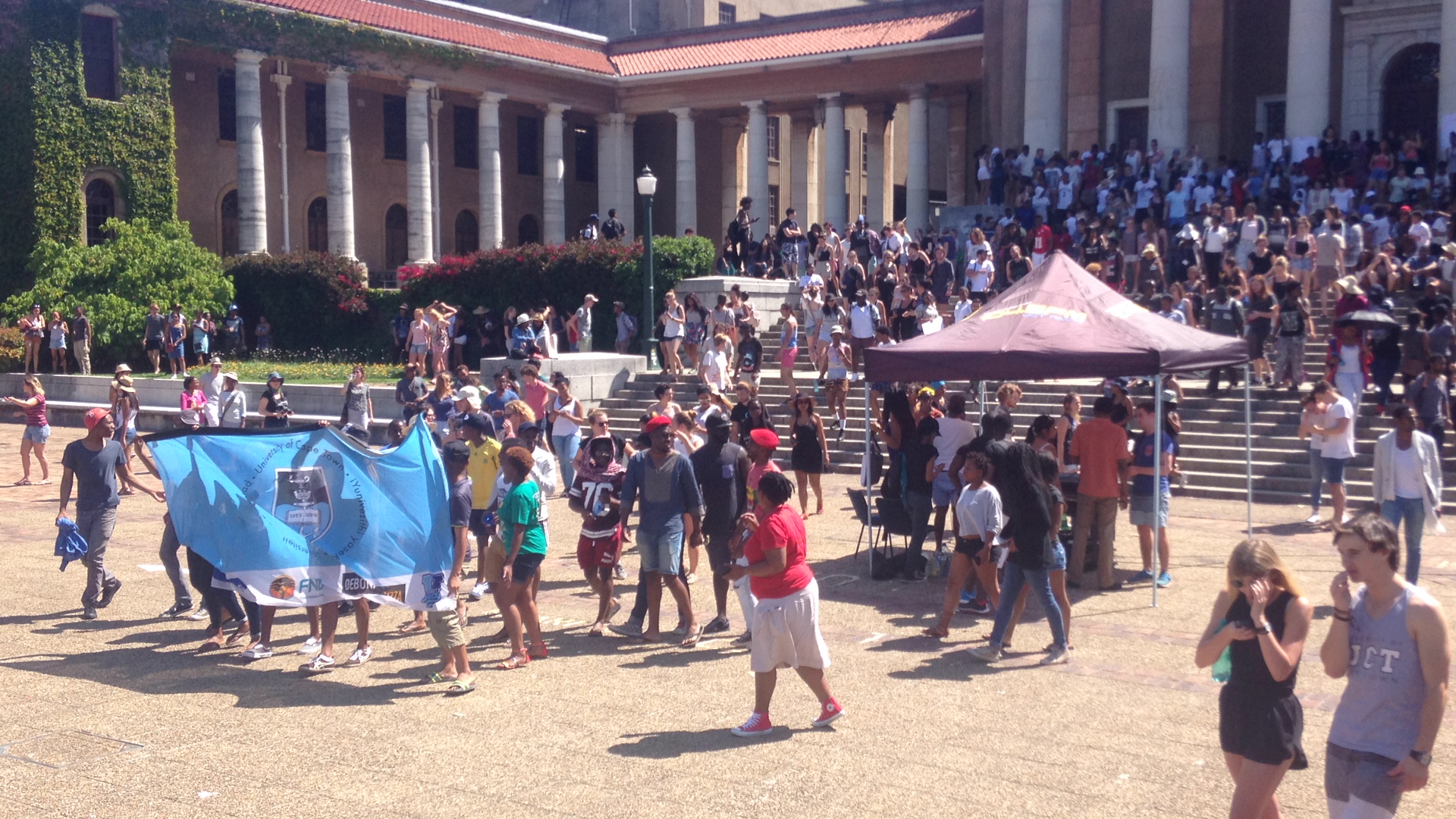 In order to achieve real and fundamental change, it is necessary for students to link up with the working class and fight capitalism / Image: Discott

A key driving force of the crisis in higher education is youth unemployment. According to The Economist’s ‘Pocket World in Figures of 2017’, which includes data from over 190 countries, South Africa has the highest rate of unemployment for young people in the world. According to Statistics South Africa, 38.2 percent of people between 15-to-34-years-old are unemployed, which means more than one-third of young people in the labour market did not have a job in 2018. It also found that approximately 3.3 million young South Africans were neither in employment, education, nor training. What is clear from this is that many young people are trying to escape unemployment by entering the higher education sector.

The demands of the students therefore reflect a real desire for fundamental change: the scrapping of upfront payments (called registration fees), for fee-free education, quality “de-colonised” socialist education, changes to the language policies, a scrapping of historical debt, quality accommodation, safe and affordable transport between residences and campuses, etc. These are not demands that are confined to students. The struggles to achieve these reflect the crisis of the capitalist system, which cannot offer any way forward for the masses as a whole. Starting off as a movement against tuition fees and for free education, it has gone way beyond these immediate issues and has exposed the crisis of capitalism itself.

Turn to the working class

In order to achieve real and fundamental change, it is necessary to fight the capitalist system itself. In order to do that it is necessary to turn to the working class. While the youth can play an important part in the class struggle, they cannot directly influence the economy or the key levers of power in society. The student protests are part of the broader class struggle, which in turn is a result of the crisis of capitalism. Due to their role in the large scale production process, the workers are central to any action to fight the capitalist system. The limitations of the movement to purely a student strike can be seen in the current protests. While they have succeeded in disrupting the normal functioning of the universities, they have had no effect on the functioning of the economy. The mines, banks, supermarkets and factories are all running normally. It is therefore crucial for the student movement to find ways of linking up with broader layers of the workers and the poor.

Since 2015 the movement led major campaigns against outsourcing at the universities. This instinctive turn of the students toward the working class was a huge step forward. Significant victories were won at a number of universities. It is necessary to spread this method, broaden the scope of the campaign and raise the level of the movement, and link it up with the struggles of the working class as a whole by developing a systematic approach to the workers. The student struggle must develop a revolutionary programme by including the main demands of the workers such as on housing, jobs, a living wage and an end to service delivery cuts. These should be a key part of the students’ programme. This should be accompanied by student delegations being sent to all the big factories and big enterprises to appeal to the workers.

The movement over university fees is not emerging in isolation. The tuition protests should be viewed in the broader context of discontent and resentment. The ruling African National Congress faces a severe crisis. Its authority has been eroded over the last 25 years in which it has pursued outright capitalist policies. Its continued rule has never been increasingly challenged by millions of South Africans. The student protests should be seen in this context. They represent nothing else than an anticipation of the South African revolution. The heroism and determination are an indication of what is to come from other sections of society. The current student protests will encourage others to come out and directly challenge those in power. In time, they will also learn to come out against the bankers, industrialists and capitalists who are the real rulers of society.