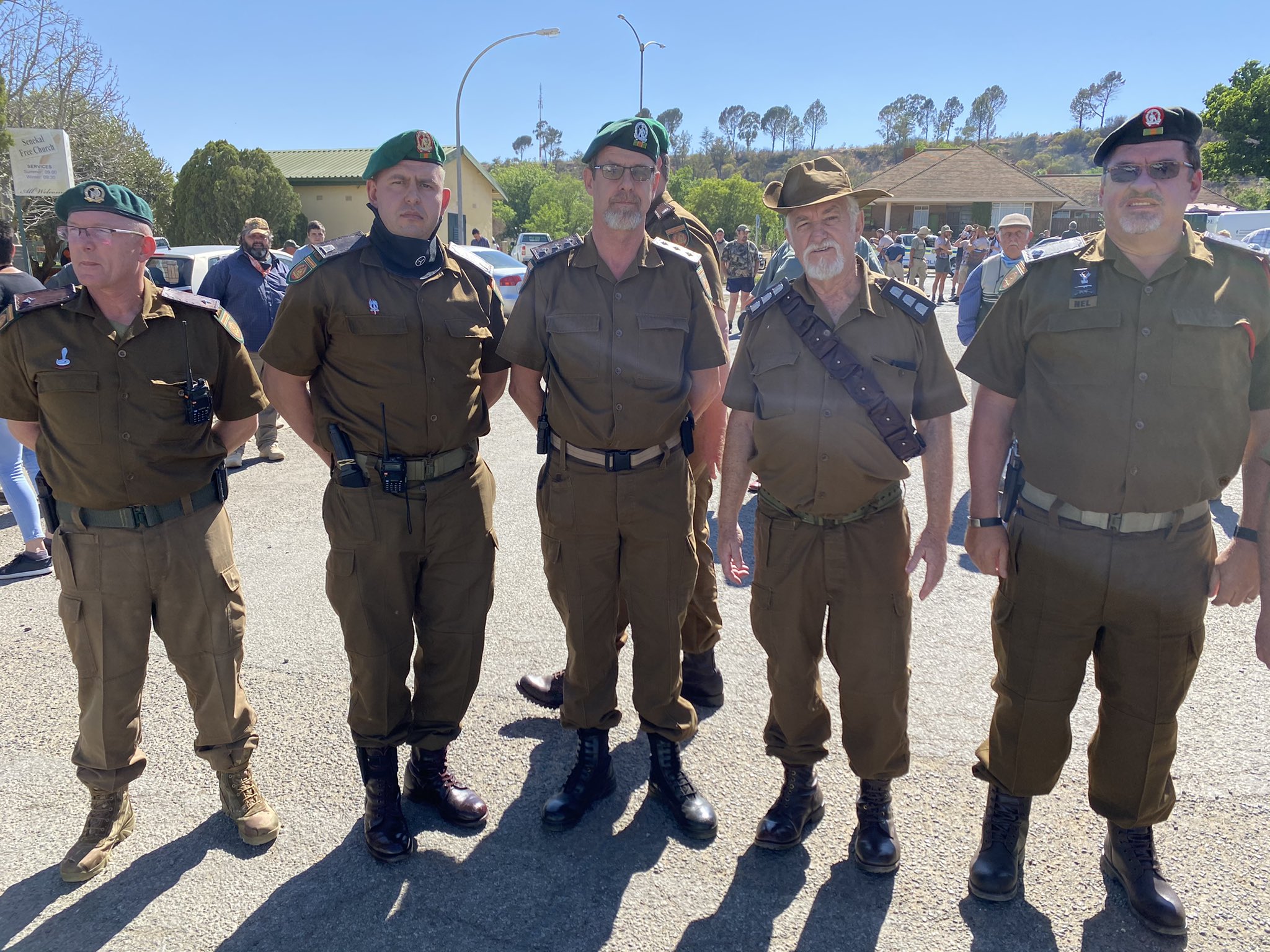 In this article, a comrade from South Africa explains how the hullabaloo over the perceived rise of the far right is ultimately a distraction for a capitalist regime that has failed to improve the dire living conditions of the masses, or to resolve the decisive land question.

The question in the above headline has been widely raised following the prominent media coverage received by some far-right elements over the past week. This in turn came after a hue and cry was raised over the issue of rural violence and farm attacks, after a young white farm manager was murdered in Senekal in the eastern Free State province.

A group of armed farmers stormed the court at the first hearing of the suspects at the Senekal magistrate, and demanded that they be handed over. An altercation ensued between the farmers and the police in which two shots were fired inside the court building. In the commotion, the police drove an armoured vehicle into the building, but the farmers managed to physically push the vehicle out of the courtyard. Then a second police vehicle was overturned and set on fire by the farmers. The police retreated and the farmers blocked the road with their vehicles.

A social media storm erupted, which then blew up in the mass media, putting the small Free State town at the centre of a media spectacle. Naturally, in a country with the history of apartheid, the images of armed, conservative Afrikaner men ransacking a court and riding roughshod over police evoked powerful flashbacks to the past.

The response of the police to retreat rather than confront the farmers, together with the fact that nobody was arrested on the day, drew sharp criticism from several quarters. It was in direct contrast to the brutality meted out by the police on a daily basis against black protesters in the townships.

The left-wing Economic Freedom Fighters (EFF) party announced that they would hold a mass rally at the second appearance of the two accused of murder. Although they correctly stated that it was necessary to mobilise against the far-right, they also confused the issue by stating that they will mobilise “to defend the state and the judiciary.” This is the same state and judiciary that is responsible for brutal attacks against the black masses on a daily basis, and the same police who carry out brutalities against workers, like the Marikana massacre in 2012, in which dozens of striking miners were killed. It is therefore unacceptable for any leadership on the left to come to the defence of the state.

Why the hysterical campaign?

Several Afrikaner lobby groups also announced that they would attend the second court appearance of the two suspects. When that day came, a small group of far-right extremists appeared on the opposite side of the town, displaying one of the flags of the old boer republics. This was immediately seized upon by the mass media, which were eager to give them maximum coverage.

These events received a lot of attention. Since the EFF, as well as the right-wing groups announced that they will hold a rally in Senekal, the media ran a hysterical campaign with apocalyptic predictions of a “racial civil war.” Headlines in the newspapers screamed of “battle lines” being drawn and of an imminent “showdown.”

In the end this ‘showdown’ turned out to be a damp squib. The EFF rally practically engulfed the town, while the right-wing were reduced to onlookers from the periphery. The ‘forces’ of the far-right reaction turned out to be a handful of glum-looking middle-aged men dressed in brown uniforms from the apartheid era. This shows the real situation in South Africa. The balance of forces is overwhelmingly in favour of the working class and other oppressed layers. Any serious mobilisation from these layers would be enough to squash these far-right elements.

The @EFFSouthAfrica Commander in Chief @Julius_S_Malema led his people into the unknown South African town of Senekal where he was addressing racial issues.

Malema is covering a leadership void created by the failure to address the legacy issues of apartheid! #EFFinSenekal pic.twitter.com/p9Zne26cJh

All of this was revealed in Senekal. However, it is no accident that this hullabaloo came just after a devastating set of figures was released that shows how bad the living situation for the masses have become. Part of this was that more than two million people lost their jobs since February. A further 1.4 million were pushed into poverty during the lockdown. Half of the population now live in poverty. At the same time, all kinds of corruption scandals have emerged, including the looting of billions of rand meant for lockdown relief and the procurement of personal protective equipment for healthcare workers. All of this elicited a furious response from vast layers of society. These apocalyptic predictions of “imminent racial conflict” therefore came in as a very handy distraction.

The immediate incident that sparked this controversy was the murder of Brendin Horner, the aforementioned young farm manager. Among white farmers and petty-bourgeois Afrikaner lobby groups there are assertions of a coordinated programme of genocide against them. But this is laughable and completely flies in the face of the facts. It is true that South Africa generally has very high levels of violent crime. This is the result of the social conditions and the history of brutality of the capitalist state. It is also true that some of this violent crime affects farmers. But a quick look at the statistics shows that the issue is completely overblown.

As we said, South Africa has a high rate of violent crime – in 2019 there were more than 21,000 murders committed in the country. But of these only 57 were committed on farms. That is less than 0.3 percent of all murders. It must be stressed that this number includes all those living, working and visiting farms, and not just white farmers on commercial farms. It therefore includes farm workers, which make up more than half of those affected. Also, the number of murders committed on farms has been decreasing every year since 2001, when it was 140, compared to 57 in 2019. In other words, murders on farms are extremely rare. The issue is that well-resourced petty-bourgeois Afrikaner lobby groups, with links to the American far-right, and which have never accepted a black government, are blowing this completely out of proportion. The real victims of violent crime are found in the townships and slums of the big cities of this country.

The land question: the real issue

The ANC government has miserably failed to solve the land question. This is the source of the problem. The last 26 years have proved that it is not possible to solve the basic problems of South African society on a capitalist basis. Poverty, homelesness, unemployment, inequality and hunger have increased. To this list of failures must be added that of the land question which can only be solved as part of the socialist transformation of society.

The fact that there is still talk of the dominance of white farmers in agriculture, where they hold 72 percent of the land to this day, shows the spectacular failures of the so-called land reform programme. In fact, there was never a real land reform in South Africa over the past 26 years. Black Africans, which make up 85 percent of the population, still own only 4 percent of the land.

This is true of the economy in general. Eight out of every 10 workers are black, while 67 percent of senior managers in the private sector are white. The monthly per-capita income for whites is currently around 24,000 rand, while blacks get a third of that on a per-capita basis, at around 6,000 rand. The CEOs of the biggest companies on the Johannesburg Stock Exchange, which is 97 percent white owned, earn more than 1,750-times more than ordinary workers. Unemployment among white people is less than six percent, while it is more than 30 percent among coloured people; and nearly 40 percent among black Africans.

All of this proves that the plight of the masses cannot be solved on a capitalist basis. But under the rising anger at the obvious lack of progress in solving the land question and the economy in general, the government is resorting to parliamentary manoeuvres to make it looks like they are seriously addressing the issue. But the so-called expropriation bill, with its “nil compensation” provision, currently before parliament, is a giant ruse. The bill does not provide the state with the powers needed to expropriate land for land reform or any other purpose “without compensation”, as is claimed by ANC leaders like Ace Magashule. That power is handed to the courts. If the state and the owner of the land cannot agree on compensation, mediation must be arranged, following which the courts have to decide what is “just and equitable.” The state must take the matter to court if requested by the owner.

The bill does not state that “nil” compensation will be awarded. It simply states that it “may” be “just and equitable” to do so after considering all relevant factors. In other words, issues such as abandoned land or labour tenant claims should be a consideration to determine if it will be “just and equitable” to award “nil” compensation. There is a procedural guarantee contained in the bill, which says that the state can only legally initiate expropriation after negotiations to buy the property on reasonable terms have failed. The final decision will then be resolved in court. In other words, the procedural requirements contained in the bill make expropriation so cumbersome for the state that it will always be quicker, easier and more hassle free for the state to buy property.

Expropriate the land by revolutionary means!

Although the apartheid regime was formally overthrown by the revolutionary mass mobilsations of the working class in the 1990s, the living conditions of the masses of black people have hardly improved. The reason for this is the negotiated settlement that was reached between the liberation movement and the apartheid regime in 1993, which resulted in state power placed in the hands of the new black elite, while the economy would remain firmly under control of the traditional white ruling class. Since then, parts of the black elite have joined the traditional capitalist class.

[LISTEN]: Deputy President @FloydShivambu outlines our immediate intervention of removing the name of Van Riebeeck street to effectively reflect a revolutionary and a mentor of the revolution, Thomas Sankara, as a sign of our presence in Senekal.#EFFinSenekal pic.twitter.com/VQJF1n66ri

This meant that the revolutionary process was halted halfway, the aspirations of the majority of the working class and the masses betrayed. The terms of the negotiated settlement is the reason why the land – and the rest of the economy – is still in the hands of the capitalist class. The only way to break this power is to expropriate them by mass revolutionary means. The mass of black workers need to rely on their own strength to free themselves from capitalist exploitation. The events of the past week shows that the balance of class forces is heavily in favour of the working class. Once they mobilise for the socialist revolution there is no force that can stop them. The task is to build the leadership to point all of this out and lead the masses to victory.