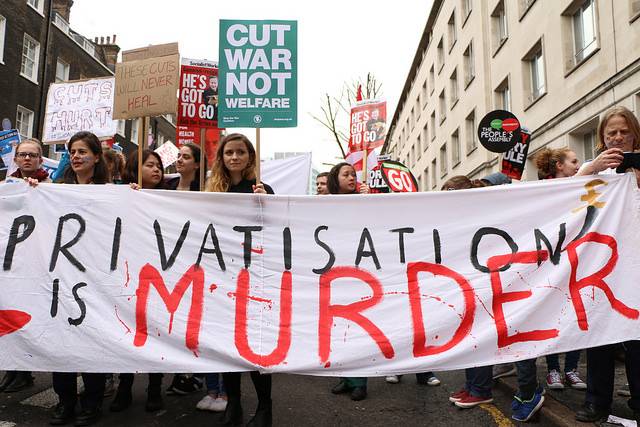 Help us build the forces of Marxism throughout the world!

Since the global crash of 2008 the world has entered into a period of profound and interminable crisis. Everywhere, the economic, political and social situation is characterised by violent convulsions which threaten the entire established order. Recent years have seen the electoral annihilation of mass political parties, the revolutionary overthrow of governments, and the disintegration of entire regions into bloody civil war. None of the forces unleashed by the crisis of capitalism show any sign of waning. Meanwhile, with another world slump on the horizon, even the shocking events of recent years will pale in comparison to what is to come. It is not for nothing that we say this is the most tumultuous period in all of human history.

In 1938, Leon Trotsky began his Transitional Programme by asserting that, “The world political situation as a whole is chiefly characterized by a historical crisis of the leadership of the proletariat.” Today, this statement could be repeated word for word without correction.

Around the world, nominally ‘socialist’ governments have carried out brutal austerity measures in full accordance with the rule of the banks. Where these measures have met with opposition, democracy has been suspended or simply ignored. Already the masses are striving for an alternative - a political expression for their anger and resentment - but even then, under the confused and blinkered leadership of even the most radical reformists, the masses’ desires are frustrated time and time again.

The world needs the ideas and revolutionary programme of genuine Marxism. It falls to us to give these ideas flesh and blood – to build the forces of Marxism internationally to make this possibility a reality. We have no time to lose!

The building of a Marxist International requires hard work and sacrifice, not least in areas which are the most exploited and deprived by capitalism. In Pakistan our comrades work in unimaginably difficult conditions, coming up against extreme poverty, corruption at all levels of society and the constant threat of violent attacks from the police, far-right thugs and terrorist organisations. In the face of all of this, the dedication and sacrifice of our comrades is truly inspiring.

Nigeria is another part of the world where poverty, corruption and violence are rife. We have dozens of comrades there, working both in the Christian South and the Muslim North. It is thanks to these comrades that we can have a Marxist analysis of the movement emerging over the current fuel crisis, and we must do everything we can to help them build a section in one of the most important countries in the African continent.

Elsewhere in Africa, we have comrades building a section in South Africa - arguably the most powerful African nation, with a strong revolutionary tradition. You may have already read and appreciated the analysis they offer on the hugely important developments emerging in South African politics, particularly around the Economic Freedom Fighters and their challenge to the ruling ANC. We owe them our support, not only politically but also financially.

In Venezuela, the sabotage of the ruling class and the crisis in the economy is hitting all Venezuelan workers - including our comrades - hard. People have to queue for hours just to get basic food goods. The section’s income from regular donations has also down because comrades are not getting paid. We need comrades in other country to help provide financial assistance to the section so it can continue its important work. If we are unable to do this then this will deal a heavy blow to our ability to provide the Bolivarian revolution with a clear-sighted and Marxist programme, without which it will be extinguished by the vicious and reactionary opposition.

Our Mexican section is currently playing a leading role in the student movement which has swept the country. This has earned our comrades the attention of the Mexican narco-state. One of our comrades has even been threatened with arrest. The same goes for our Indonesian comrades, one of whom is behind bars for the ‘crime’ of being a trade unionist. We must give whatever help we can to these comrades, who cannot rely on the support of wealthy patrons or liberal NGOs.

Through the generosity and sacrifice of ordinary people who believe in a better world, we can achieve great things. In the USA, the belly of the beast, our section of little over 100 comrades has obtained an office in New York, an important step forward. In Canada, where we also have just over 100 comrades, the section now has four full-timers and an office. This was achieved by the hard work of the comrades, but also by generous donations from supporters around the world. This is internationalism in action!

Jeremy Corbyn, the left-wing leader of r the Labour Party is facing an attempted coup of his MPs. This has sparked a mass movement, with meetings all over the country. The comrades in Britain have been actively involved in fighting the Labour coup attempt. Calling meetings and rallies, demanding removal of right-wing MPs and explaining the need for a socialist programme.

We aim to raise €2,500 over the next two months to go towards the work of the International and to pay for comrades from Pakistan and elsewhere to be able to attend the World Congress this summer.

There has never been a greater need to build the forces of Marxism worldwide. We appeal to all of our readers and supporters to help us in this historic task. Please donate what you can today!

In Defence of Marxism