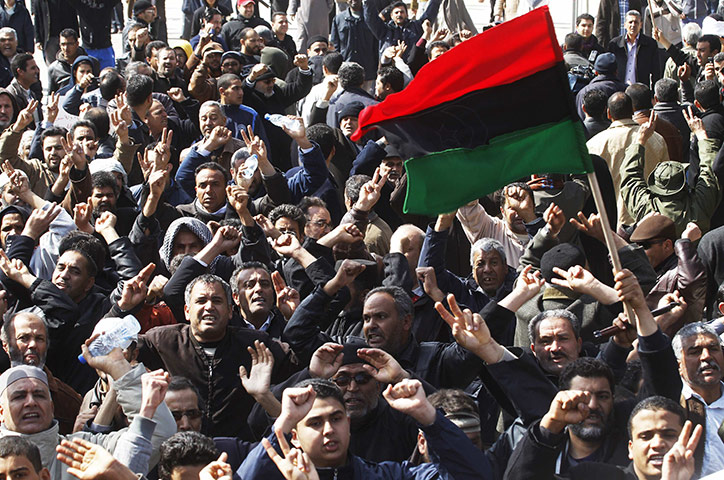 In Venezuela, and Latin America as a whole, some on the left have been presenting the Gaddafi regime as if it were anti-imperialist, failing to see the real nature of the revolution that is taking place. Here we publish a statement of the Venezuelan Marxists of Lucha de Clases, where they explain the real nature of the regime and explain the need to support the uprising of the Libyan people.

Following in the footsteps of Tunisia and Egypt, the Libyan people are rising up against the regime in their country, demanding the departure of the current president Muammar Gaddafi. This has been seen from different points of views around the world. Particularly in Latin America there is confusion about what is really happening. We believe it is necessary to explain our position in this regard, as some media have addressed the question as if Gaddafi's government were a revolutionary government and is facing a rebellion orchestrated by imperialism.

We need to explain that rather than being an event organized by foreign intervention the events unfolding in Libya today can be compared to the Caracazo of February 27, 1989. President Chavez has made the same comparison in the case of the recent uprisings in Tunisia and Egypt: "In Egypt, what is happening is the Caracazo, a sudden awakening of a people. We have just seen the first ripples. They are events that mark a new story in the world" (19 February 2010).

The character of the Gaddafi regime

Far from being an anti-imperialist government, however, Gaddafi has agreed on several occasions with world imperialism, meeting and signing deals with Berlusconi, Sarkozy, Zapatero and Blair. He has also received visits from the Spanish King Juan Carlos, representing employers in that country.

In 1993-4, Gaddafi introduced the first laws that were part of an economic turn in the direction of the opening up of the free market. For a decade, not much was done in this direction. But faced with economic difficulties in 2003, the process accelerated. In return for introducing laws that allowed privatization and a greater openness to foreign capital investment, the regime began a reconciliation with imperialism which soon paid off.

In September 2003 the UN lifted all economic sanctions against Libya, in exchange for an economic package which included plans to privatize 360 state enterprises, and in 2006 Libya even requested entry to the World Trade Organization. In 2008 the same Condoleeza Rice (former US Secretary of State) said that Libya and the United States shared common interests such as "fighting terrorism, trade, nuclear proliferation, Africa, human rights and democracy."

Today all the major oil multinationals are operating in Libya, British Petroleum, Exonn Mobil, Total, Repsol, among others. On the other hand, it is worth noting that Gaddafi holds five percent of the shares of Fiat, as a result of opening the country to the Italian capitalists.

All this makes clear that this regime is closer to the capitalist and imperialist interests than to the interests of their own people and the revolution. As the PSUV MP in the state of Bolivar, Adel el Zabayar, who is of Arab origin, said: "Gaddafi is no longer the leading anti-imperialist of yesterday and faces a popular outcry at the massacres."

The character of the uprising in Libya

This uprising in Libya has the same causes as those in Tunisia and Egypt. The result of Gaddafi’s deals with imperialism has been an economic disaster for most people, despite the country's oil wealth. Libya is a country with 30 percent unemployment and the cost of living is getting ever higher. The prices of basic foodstuffs such as rice, flour and sugar have increased by 85% in the last three years. This is the real background to the popular rebellion that is taking place in Libya. For this reason Gaddafi supported Mubarak and Ben Ali against the revolutionary uprisings of the people of Tunisia and Egypt.

Inspired by their brothers in the Arab world, the workers, youth and poor in Libya have stood up against a dictatorship that has revealed its true character. The uprising that began in Benghazi, the second largest city, has spread to many regions of the country.

Gaddafi responded with brutal violence, and as during the popular uprising in Caracazo, has used the army against the unarmed civilian population. He has also used mercenaries against the people. The fact that Gaddafi was forced to pay mercenaries is evidence of the fact that he does not trust his own soldiers. In Benghazi, the army joined the revolutionary people and this has been repeated in other cities. It is difficult to estimate the death toll, but we know that in Benghazi alone more than 230 people have been killed. Repression has reached such a brutal level that they have used the air force to bomb the demonstrators.

Without doubt, imperialism in this situation will try to assert their interests. We oppose any imperialist intervention in Libya. The imperialists are the ones who sold weapons to Gaddafi, made business deals with him to plunder the country's oil wealth and used the country as a barrier against illegal migration in Europe. Imperialism is not interested in the fate of the Libyan people, but only the country's natural resources.

Solidarity with the Arab revolution!

Lucha de Clases, the Marxist tendency of workers and youth in the PSUV, declares the following:

Long live the revolution in Tunisia, Egypt and Libya!