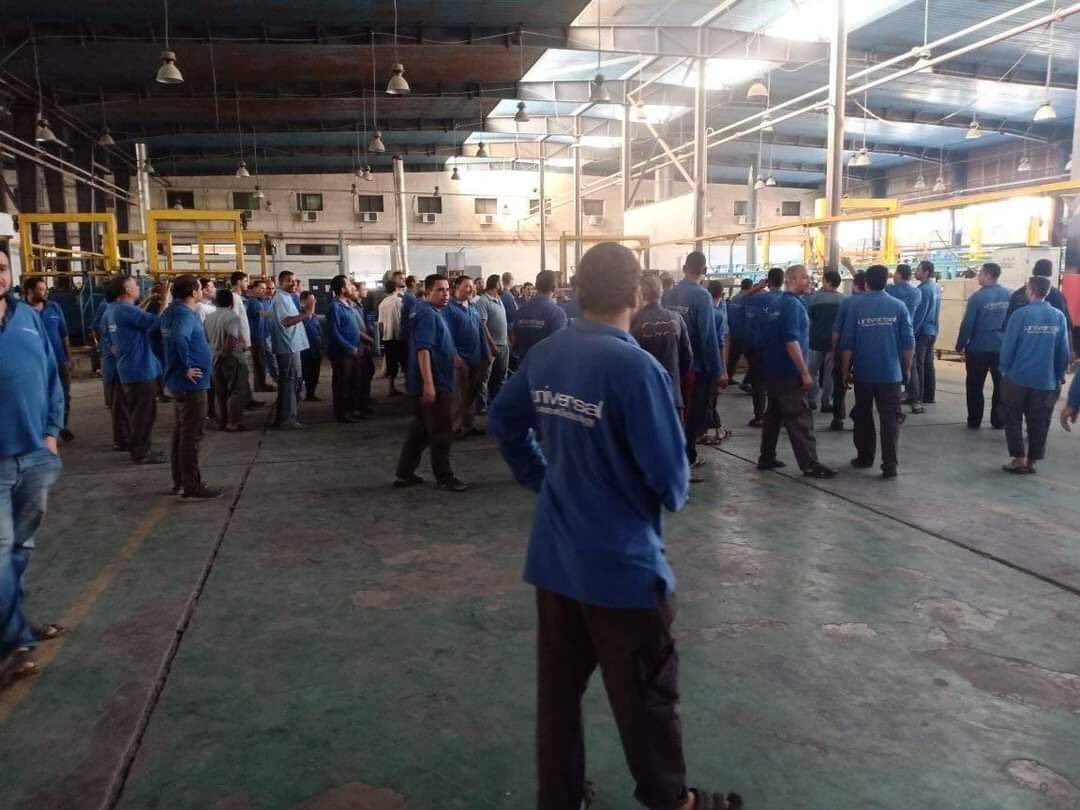 Since 16 September, more than 2,500 factory workers at the electric appliance company Universal have been engaging in a heroic strike at the industrial zone in 6th of October City, near Cairo. Please read this appeal, and share our solidarity motion (below).

Workers initiated the strike after a series of attacks on working conditions by the bosses. Wages have not been paid for three months and hazard pay has been completely withdrawn. The latter is especially important, since the factory has experienced an increased number of injuries, from the amputation of fingers and hands to workers having heart attacks. Conditions have worsened so badly that 15 have died in the last three months, including two who took their own lives.

These attacks come at a time when the masses in Egypt are already feeling the effect of the government’s brutal austerity measures. Living conditions for workers and the poor have fallen significantly in the recent period, as a result of the ‘structural adjustment’ policies imposed by the International Monetary Fund, with the support of the Egyptian ruling class and the military dictatorship that protects it.

The military itself has played a particularly pernicious role in protecting the capitalists during the strike. Three leading factory workers, as well as one of their sons, were ‘arrested’ in their homes for allegedly inciting the strike and disrupting work. Workers are now threatening a sit-in, amid rising tensions with the police and escalating repression.

These events have further discredited the dictator Abdel-Fattah el-Sisi, who claims to represent the Egyptian masses and stand above the class struggle. Ultimately, the military dictatorship will only defend the interests of Egyptian capitalists, and exists only to suppress the working class.

Despite constant repression by the military dictatorship, the Egyptian working class has proven itself willing to fight to defend living standards and working conditions. Egyptian workers have a long tradition of fighting back against the bosses and will continue to struggle in defence of their rights. We, the Marxists, offer our full support to the workers of Universal, and to others engaged in the struggle to preserve their livelihoods in the face of brutal attacks by the capitalists and the military dictatorship.

Such economic struggles provide very important experiences and lessons for the working class, experiences which will prove crucial in the future revolutionary struggles in Egypt.

We call for the demands of the workers to be met. If the employers claim they are insolvent, workers must demand they open the books and reveal the company’s financial secrets. If the company is bankrupt, it should be confiscated and placed under the control of the workers, who are the most capable of managing it.

Currently, the army is isolating the factory, cutting off the workers from the outside world. We must be their voice in this period, defending and spreading their message as far as possible. We call on the working class in the region and worldwide to help support their comrades in Egypt. We call for the widest campaign of international solidarity with the workers of the Universal company, in the face of the campaign of repression and restrictions imposed on them by the state, and we call for the widest campaign to demand the release of detained workers and the cessation of security prosecutions.

What you can do to support the struggle:

The workers of the ‘Universal’ electronics factory in Cairo’s 6th of October City have been on strike since 16 September. Having endured three months of withheld wages and dangerous working conditions, they have bravely decided to strike for their basic rights. After 15 of their co-workers died in the past three months from harmful working conditions and many more suffered severe injuries, they are struggling not only for a fair wage, but to protect their lives and the lives of their fellow workers. In such dangerous working conditions it is all the more disgraceful that the company has withdrawn all hazard pay for the past period.

While they are fighting this life-or-death struggle, they have been continually targeted by the repressive attacks of the police and the army. Three leading strikers and one of their sons have been abducted and are being detained for the crime of fighting for their rights. Currently, the workers have been isolated by the army, with no way to get their message out to the world. In these brutal conditions, international solidarity is the most important tool they have.

We call on Universal to immediately meet the demands of the striking workers. All withheld wages must be paid, hazard pay must be reinstated, working conditions in the factory must be improved and made safe. We also demand an end to the victimisation of strikers. Those currently detained must be immediately released. These are political prisoners, who have committed no crimes whatsoever.