"We no longer take orders from our hierarchy, we are following our hearts. We were trained to protect property and citizens, not to fire at people. We are with the people," one rebel soldier is reported as saying. 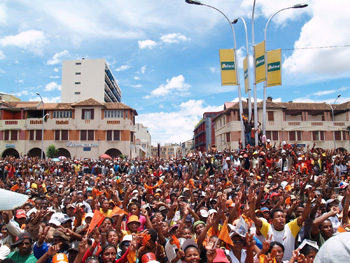 Anti-government protestors in the capital of Madagascar, Antananarivo. Photo by IRIN.

On Sunday the depth of the crisis and the level of social discontent in Madagascar directly affected a group of soldiers of the Army Corps of Personnel and Administrative and Technical Services who had been ordered to move against protestors on the streets. The soldiers refused to obey orders to fire on the people and repress anti-government demonstrators. Following this, they then declared they would not obey government orders either.

As one rebel soldier stated, "We no longer take orders from our hierarchy, we are following our hearts. We were trained to protect property and citizens, not to fire at people. We are with the people."

The soldiers at the Camp Capsat military camp on the outskirts of the capital of Madagascar, Antananarivo, prepared their lines of defence as they were expecting an attack on the part of the presidential guard. The 600-strong troops apparently control large stocks of arms and ammunition.

These dramatic events remind us of Bertolt Brecht's poem, "General, Your Tank Is a Powerful Vehicle", which goes like this:

It smashes down forests and crushes a hundred men.
But it has one defect:
It needs a driver.

General, your bomber is powerful
It flies faster than a storm and carries more than an elephant.
But it has one defect:
It needs a mechanic.

General, man is very useful.
He can fly and he can kill.
But he has one defect:
He can think.

These soldiers in Madagascar are being forced to think by events. As they say, they were trained to defend the people, not to shoot on them. And now they face the wrath of the ruling class and its officer caste.

Talbot Antonin Alexis, Director General of Madagascan National police, has called for unity between the police, the armed forces and the gendarmerie in a desperate attempt to re-establish some order. The Minister of Defence, Mamy Ranaivoniarivo, made it clear on Monday that it would be taking "military measures within the army." However, the Minister did not specify what measures. That explains why the soldiers prepared their lines of defence.

The government has accused the rebel soldiers of organising a mutiny, something the soldiers deny. They stated that they were simply refusing to be used against protesting civilians. Colonel Noel Rakotonandrasana, a spokesperson of the rebel soldiers, reiterating this point, explained that, "We cannot accept the repression of the civilian population." 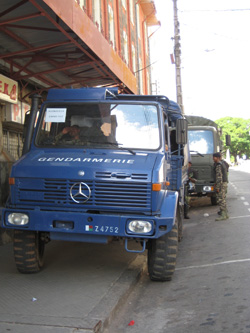 The Director General of Madagascan National police, has called for unity between the police, the armed forces and the gendarmerie in a desperate attempt to re-establish some order. Photo: Christina Corbett/IRIN.

What has provoked the recent soldier rebellion has been the increasing use of the army to clamp down on the rising tide of protest sweeping across the country. Since the beginning of this year about 100 people have been killed on the streets by the army. In February a protest rally was marching on the presidential palace but it was met with brutal repression and 28 people were killed.

Madagascar has a population of 20 million people, most of whom live in abysmal poverty. More than half the population survives on less than $1 a day. Like most African countries, Madagascar has been forced by the World Bank and the IMF to apply so-called structural adjustment programmes, involving opening up its markets to the more powerful industrialised countries and privatisation. In the last recession in 2001-02 at the same time as a serious political crisis affected the country, GDP fell by 12%. Last year inflation stood at over 9%, seriously affecting the already impoverished masses.

The 2001 presidential elections were heavily disputed but in April 2002, the High Constitutional Court declared Ravalomanana the winner, who then went on to win a second presidential election in 2006. Since then, however, the world economic crisis has added to the already difficult living conditions of the masses. Ravalomanana's so-called "free market reforms" are now being exposed for what they really are, an attack on ordinary working people on the island. 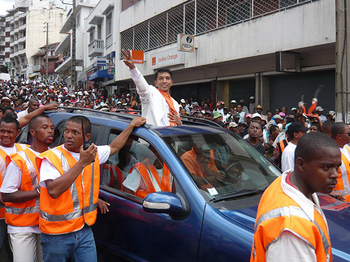 Opposition leader, Andre Rajoelina, during an anti-government protest in Antananarivo. Photo by IRIN.

Rajoelina, "a charismatic young businessman", as he is described in the media, and quite a wealthy man, also owns his own television and radio stations. He was the mayor of the capital until recently, and used this position to attack the government. In doing this he has tapped into a mood of anger brewing among the poor masses. In this context the army ranks have also been affected. Apart from refusing to fire on the people, the soldiers have been complaining about pay and the fact that their superiors have been embezzling funds.

The unfortunate thing about all this is the lack of a genuine mass socialist alternative that could unite the workers, the poor and the rank and file soldiers against the ruling elite. In 1972 the Party for Proletarian Power (MFM) was set up as a left-wing opposition. Unfortunately, as has happened to many former "left" forces in the past, the party abandoned its left-wing credentials to espouse liberalism and changed its name to the Movement for the Progress of Madagascar, in the meantime losing all its parliamentary representatives.

In the political vacuum that exists in the country we have unfortunately a struggle between two businessmen. But the movement of the masses and the revolt within the ranks of the army shows quite clearly that the potential is there for something much bigger.

After the mutiny of the Border Guards in Bangladesh, this revolt of soldiers in Madagascar highlights the point that Marxists have always made: in acute social, economic and political crises, when the masses start to move, the soldiers, the "workers in uniform", sons of workers and peasants, can turn against their officers, refuse to be used against the masses, and can therefore be won over to revolution. The famous "armed bodies of men" cannot always be relied on by the ruling classes. What we have seen in Bangladesh and Madagascar are indications of how deep the crisis is becoming. It bodes well for the workers of the world, but it requires a conscious, revolutionary leadership for it to be transformed into a force for revolutionary change.

Postscript: Since this article was written a section of the army has taken over army Headquarters and forced the defence minister, Mamy Ranaivoniarivo to resign!