On Tuesday September 23 a 24-hour warning general strike called by the National Front brought Panama to a standstill. It was called in protest against attacks on welfare. Jorge Martín reports.

The National Front is an umbrella organisation that brings together the main trade unions and social organisations in the country, including the National Independent United Trade Union Confederation (CoNUSI), the National Council of Organised Workers (CoNATO), and the unions of building workers (SUNTRACS), social security workers, teachers and others. This latest warning general strike was the highest point in the mass movement of strikes and demonstrations that have shaken Panama since the removal of the Social Security Fund (CSS) director Juan Jovane, on Wednesday, September 11. 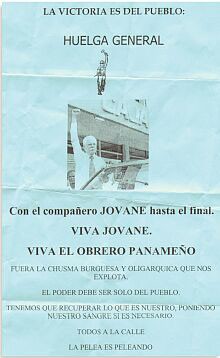 As in many other countries around the world, the social security system in Panama is facing a serious crisis. Following the adjustment policies dictated by international financial institutions like the IMF and the World Bank, the government of Panama is preparing its privatisation as a way of "solving" the problem of the deficit of the "Invalidity, Old Age and Death Fund".

However, the privatisation of social security would only be a "solution" from the point of view of big business, which is to a large extent responsible for the deficit in the first place, because of the widespread fraud in the payment of social security contributions on the part of the employers.

From the point of view of the workers privatisation would be a disaster. To run the social security system according to "market" criteria would mean all sorts of cuts in pensions, increasing the retirement age and attacks on the acquired rights of the working people.

The removal of CSS director Juan Jovane, notwithstanding government accusations of corruption and failure to manage the system, was due to his opposition to privatisation plans and his refusal to propose a "balanced" budget (that is a budget of cuts). Instead of this he presented a budget, which amongst other things, complied with the agreements reached with CSS workers after their strike earlier this year. The CSS Board of Directors, under pressure from the employers and the government refused to accept Jovane´s budget and so the government removed him from his position.

The workers of Panama are justifiably angry and have replied with mobilisations and strikes which the government has responded to with the use of anti-riot police and the arrest of trade union leaders. Amongst the first to come out in protest were the CSS workers who declared a 48-hour strike on the same day Jovane was sacked. 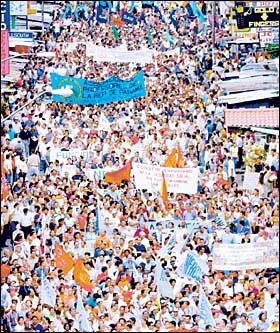 The following day the construction workers joined the protests and there were serious clashes with anti-riot police that had occupied the CSS offices. "Not even under the dictatorship had we seen units of the National Police in the offices of the CSS" shouted workers and admin staff, who warned that they were ready to defend the autonomy of the health institution even "with blood on the streets" if need be.

During the clashes more than 50 workers were arrested, amongst them the leader of the building workers, Saúl Méndez. The demonstrators demanded the calling of a general strike from Monday, September 15. Two trade union representatives on the CSS Board who voted against Jovane´s budget, were declared persona non grata by the workers. One of them, the teachers’ representative, Roberto Valencia, has already seen proceedings to expel him from the union initiated by his members.

On Friday 12, there was a mass demonstration with more than 50,000 people taking part. The trade union leaders gave the government a three-day ultimatum to reinstate the CSS director, or they would call a general strike. On Sunday 14, a general assembly of the CoNATU and CoNUSI, attended by large number of rank and file workers, decided to ratify the call for a general strike on September 23.

The week beginning September 15 started with the calling of an all out strike by 9,500 CSS workers and the calling of a 48-hour nationwide strike on the part of the teachers. Secondary and university students also joined the protests setting up pickets and roadblocks and demonstrations. Once again the government responded with repressive measures, threatening to arrest all those who participated in the roadblocks and to sack any CSS worker involved. They also accused Jované of "destabilising the country". On Thursday 18, once again tens of thousands of workers demonstrated in the pouring rain. The march was led by Saúl Méndez, the building workers’ leader who had just been released from prison. Under the pressure of this massive movement the government publicly declared that they had no plans to go ahead with the privatisation of the CSS. 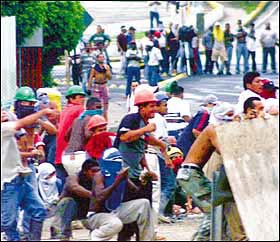 That is how we got to last Tuesday’s general strike. The strike was massive. It paralysed 75% of building works, 95% of the education system and 25% of the private sector. There were heavy clashes in the university between the students and anti-riot police when the latter tried to prevent the students from marching to join the workers’ march.

So far the government does not seem prepared to make any concessions and the trade unions have already announced a new general assembly on Saturday to decide on new measures of struggle. The mood is one of struggle. For instance, the teachers in Veragua and Colón decided not to resume work after the 24 hour general strike and strongly criticised the national teachers leaders for having stopped the strike without the government having made any concessions and without consulting the ranks.

This is a decisive struggle for the workers and the people of Panama. It is part of the general fightback throughout all of Latin America against the plans to privatise public services, and in general against the capitalist policies of these countries’ governments. Only the organised and massive struggle of the workers and the people can stop the plan to privatise the social security system, as was proven by the example of the struggle in El Salvador, where months of mobilisations and strikes defeated similar plans of the national government earlier in the year.

At the same time we must understand that these adjustment and privatisation plans are not simply the result of evil governments or the pressures of the IMF. Rather, they reflect a capitalist system in a deep crisis, whose only solution is to get the workers to pay for it. Therefore the building of a revolutionary organisation based on the ideas of Marxism able to lead the struggle for the socialist transformation of society becomes an urgent task. Only the overthrow of the capitalist system can guarantee the defence of the acquired rights of the working class.